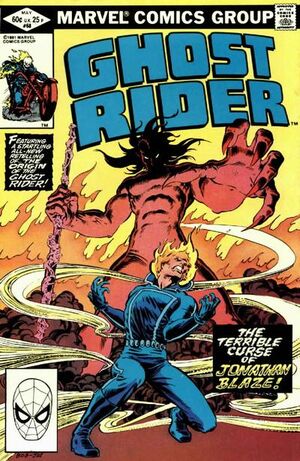 Appear... Prince of Darkness! Your humble servant beckons! Through time eternal, through endless space, I beg thee... journey to this place.

Appearing in "The Curse of Jonathan Blaze!"Edit

Synopsis for "The Curse of Jonathan Blaze!"Edit

It is late at night and Johnny Blaze enters a church. The only man present is a priest. Johnny is feeling somber, and asks the priest to hear his confession. The priest sets him down inside the confessional and Johnny tells him the story of his life. He explains in detail how he sold his soul to the Devil to save the life of his adoptive father, Crash Simpson. As a result, Johnny was bonded to a demon and became the Spirit of Vengeance, the Ghost Rider.

As he concludes his confession, he reveals that he knows the man behind the screen is not a real priest. He is actually a thief who murdered a priest and took his clothes. He planned on stealing gold valuables from the church when Johnny interrupted him.

The false priest runs out of the confessional and steals Johnny's cycle. Johnny transforms into the Ghost Rider and crafts a new cycle made of Hellfire. He chases the priest across the countryside and finally forces him off the bike. The priest falls down onto the railroad tracks, and Ghost Rider sears his soul with Hellfire.

At dawn, the police arrive and finds the man in a state of petrified catatonia. Johnny Blaze answers a few questions from the police, then turns and walks away.

Retrieved from "https://heykidscomics.fandom.com/wiki/Ghost_Rider_Vol_2_68?oldid=1525940"
Community content is available under CC-BY-SA unless otherwise noted.