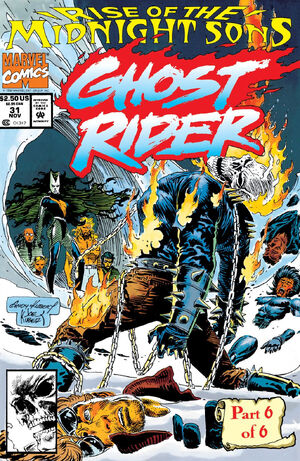 Soon all my children will be returned to me. Then we will feast on the pitiful bones of our foes. Starting with the pseudo-demon... Ghost Rider!

Lilith and her Lilin locate the body of their fallen demon, Meatmarket. Meatmarket recently met a grisly end at the hands of the Nightstalkers.[1] Lilith decides that she wants to stage her final battle against the Nine at the place of her resurrection – Greenland. Pilgrim opens a portal, and the brood teleport thousands of miles away. Lilith takes the frozen remains of the two scientists she killed and fuses them with Meatmarket's corpse.[2] She then uses her magic to call forth the lost spirit of Daniel Ketch. She binds Ketch's soul to her composite Lilin creation and Meatmarket is born anew.

Ghost Rider and Blaze meanwhile, ride across the countryside in the hopes of finding Doctor Strange. Ghost Rider is confident that Strange is the only man capable of stopping Lilith and saving Ketch's soul.

In Boston, Blade, Frank Drake and Hannibal King return to the offices of Borderline Investigative Services after their most recent run-in with the Lilin. As they open a door, an explosion erupts forwards blasting all three men backwards. They disappear from the scene soon after.

In New York City, Doctor Strange encounters the vampire Morbius during his nightly feeding. Strange requires Morbius' aid, and the living vampire tells him that "you only had to ask". Strange opens a portal that transports Morbius to the rest of the chosen Midnight Sons.[3]

All nine of the chosen warriors simultaneously appear in the Arctic Circle, including Morbius, the Nightstalkers, the Spirits of Vengeance and the Darkhold Redeemers. Lilith and her brood stand ready to face them. Lilith commands Pilgrim to tear a hole in her throat with his fingernail, thus creating a dimensional portal within Lilith's own body. From this, she plans on resurrecting all of her Lilin. The Midnight Sons charge after her, but Meatmarket blocks their path. He attacks Ghost Rider, sending him sprawling from his motorcycle. Johnny Blaze is reluctant to turn his Hellfire shotgun against Meatmarket because he knows that Dan Ketch is part of the creature's genetic matrix now. Victoria Montesi clubs Meatmarket across the skull, but this does little good. Blade slices him across the stomach with one sword, and drives the other downward into his shoulder. Howling in pain, loses control of himself and wades through his own comrades to get to his foes. He attacks Pilgrim, causing the Lilin to create a dimensional rift inside himself. Ghost Rider gets back up and ensnares Meatmarket with his chains. Morbius meanwhile, attacks Fang and bites him across the throat. He suddenly realizes that Fang is responsible for the vampire's current physical state.[4] Blade attacks Blackout, while Johnny Blaze turns his attention towards the rift. Ghost Rider attacks Lilith directly and holds her high above his head. He then forces Lilith into her own rift and the gateway instantly closes. Lilith and her Lilin are gone.

As things begin to quiet down, Doctor Strange arrives. He tells the Midnight Sons that he could not attack Lilith directly, for the use of his own powers would only serve to strengthen the rift, hastening Lilith's goals.

Some miles away, Lilith and the Lilin re-emerge on Earth. The battle has greatly weakened her, and she needs time and sustenance to gain her strength back. Seeking nourishment, Lilith attacks one of her own Lilin, Nakota, and begins drinking her blood.

Retrieved from "https://heykidscomics.fandom.com/wiki/Ghost_Rider_Vol_3_31?oldid=1525931"
Community content is available under CC-BY-SA unless otherwise noted.