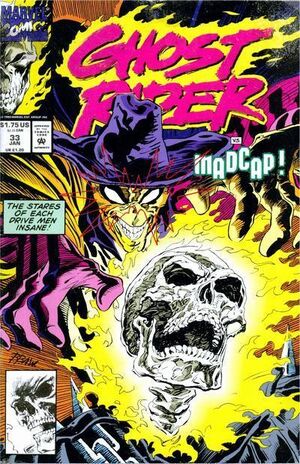 We can't allow it to end here, Ghostie! No. This is the beginning of a beautiful relationship... no matter how much innocent blood must be spilled.

Appearing in "What Does It Matter?"Edit

Synopsis for "What Does It Matter?"Edit

Daniel's mom finally reveals the truth to Dan, that he's adopted. Her husband knew who his birth parents were, but she never did. Madcap goes on a rampage, but is stopped when he feels the Penance Stare. And Dan decides that he's got to go find his true parents. Also, Stern and the Firm stage an assault on H.E.A.R.T., and kill everyone but Tyler, and Stern has big plans for her.

Retrieved from "https://heykidscomics.fandom.com/wiki/Ghost_Rider_Vol_3_33?oldid=1426816"
Community content is available under CC-BY-SA unless otherwise noted.