Part of the 'Road To Vengeance: Missing Link' event 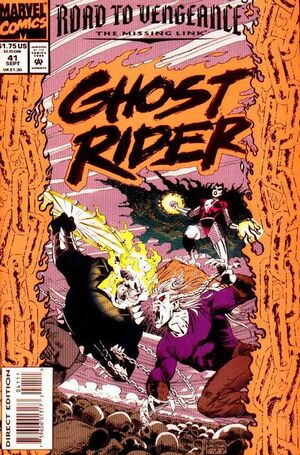 In Greenland, Lilith has regenerated her children inside her, but she needs one of them to help her give birth to them, so she calls out into the world. Elsewhere, Centurious hears her call and decides an alliance is in order. In New York, Seer visits Danny and tells him that he needs to go to the Night Club with her to learn answers. Back in Greenland, Outcast answers his mothers call and slashing her open, her previously consumed children are reborn, more powerful than before. Blackout and Pilgrim head out immediately to kill Ghost Rider, and they intercept him and Seer on their way to the Night Club. They are caught by surprise, and Blackout threatens Ghost Rider with killing Mrs. Ketch again, and Pilgrim takes them to Forest Hills. There, Blackout holds her hostage, but Ghost Rider once again manages to drive them off, only to have Centurious arrive and takes Mrs. Ketch for himself, telling Ghost Rider that he will find him if he wants to see her alive again.

Retrieved from "https://heykidscomics.fandom.com/wiki/Ghost_Rider_Vol_3_41?oldid=1426824"
Community content is available under CC-BY-SA unless otherwise noted.