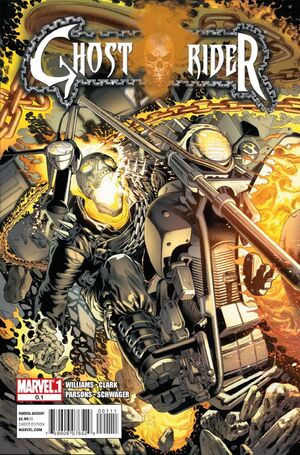 Avengers? Fantastic Four? X-Dudes? They can all kiss my bony, flammable ass.

Appearing in "Give Up the Ghost, Part 1"Edit

Synopsis for "Give Up the Ghost, Part 1"Edit

After rescuing a woman from a demon, Johnny Blaze recounts how he came to be the Ghost Rider in a bar, when a man named Adam offers to rid him of the curse now that the Serpent is spreading fear across the world.

Johnny refuses and sees people rioting outside, including a man assaulting a woman. He goes to help her without changing into the Ghost Rider and takes a beating from him. Waking up in the woman's home, he is reluctant to accept help from her, believing that no one helps him without wanting something in return.

Johnny changes his mind and asks Adam to take the curse away, the catch being that someone Johnny doesn't know will become the Ghost Rider in his stead. Now all Johnny has to do is drive so fast that the curse rips off him. He succeeds and finds himself in the desert, finally free of the Ghost Rider.

HELL’S OWN ANGEL RETURNS IN ALL NEW POINT ISSUE THAT LEASDS STRAIGHT TO THE NEW GHOST RIDER ONGOING SERIES! with the events of FEAR ITSELF tearing the Earth apart a mysterious and powerful figure offers Blaze a faustian pact and a chance for peace. Can Blaze actually allow himself to 'Give Up The Ghost'? And, if so, who will the Ghost Rider pass onto next? The souls of Johnny Blaze and everyone within the Marvel Universe depend on this decision. Vengeance rides in a new direction with Rob Williams (Throwbacks, Daken) and Matthew Clark (Superman, Doom Patrol). Grab your leather, metal and hellfire because it’s the end of an era for Ghost Rider and the beginning of a new life for Johnny Blaze. It’s gonna get loud! FIRE!

Retrieved from "https://heykidscomics.fandom.com/wiki/Ghost_Rider_Vol_7_0.1?oldid=1426926"
Community content is available under CC-BY-SA unless otherwise noted.