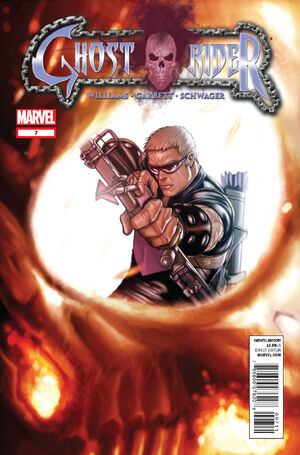 GUEST-STARRING HAWKEYE! The Avenger Hawkeye has followed the trail of destruction and ruined souls the Ghost Rider has left in its burning wake. And he isn’t the only one with his sights set on the Spirit of Vengeance. The wild hunt for the Rider begins here.

Retrieved from "https://heykidscomics.fandom.com/wiki/Ghost_Rider_Vol_7_7?oldid=1652963"
Community content is available under CC-BY-SA unless otherwise noted.