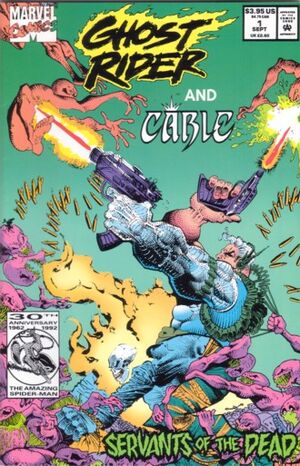 Ghost Rider and Cable Servants of the Dead Vol 1 #1
September, 1991

Appearing in "Servants of the Dead"Edit

Synopsis for "Servants of the Dead"Edit

Cable is underground while his fellows, X-Force sleeping, to enjoy with the morlocks because of Masque had agitated them.

When a patrol of morlocks detected him, he falls down in a hole. Later he discover a mysterious girl that she run terrified for the fear of someone or something. Meanwhile Ghost Rider is in the graveyard where started his story, when Cable and the mysterious girl are trapped for the villains...

Retrieved from "https://heykidscomics.fandom.com/wiki/Ghost_Rider_and_Cable_Servants_of_the_Dead_Vol_1_1?oldid=1430825"
Community content is available under CC-BY-SA unless otherwise noted.