Part of the 'Heaven's on Fire' story arc 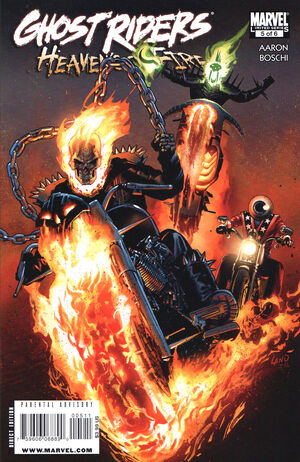 Appearing in "Sole Reigning Holds the Tyranny of Heaven"Edit

The battle against Zadkiel, usurper of heaven, nears its conclusion as the all-new Orb and all-new Vengeance enter the fray, leading an army of zombie bikers against an army of Gun Nuns, with Johnny Blaze and Danny Ketch caught in the middle. Plus, Jaine Cutter versus the Son of Satan and the junior Anti-Christ, Kid Blackheart, makes his move.

Retrieved from "https://heykidscomics.fandom.com/wiki/Ghost_Riders:_Heaven%27s_On_Fire_Vol_1_5?oldid=1727418"
Community content is available under CC-BY-SA unless otherwise noted.