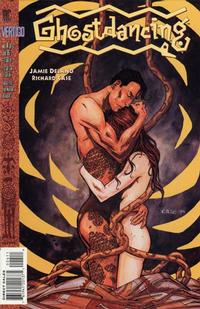 I am Coyote-Old-Man. My power is great.

Father Craft (Coyote-Old-Man) is placed inside of a cell where he is reunited with White-Buffalo-Woman (also known as Brown Mary and Hump-Cow). He is enraged to find that she is just a drug-addled shell of a person who no longer has the spirit.

Meanwhile, Brother Christopher and Zoe Zinger have escaped from the Mammonite facility. They shore up at an apartment belonging to some of Zoe's hippie friends. Christopher gives Zoe a sample of the Ghostdancing liquid and the two make love.

Elsewhere, the director of the Mammonite society has a sample of the Ghostdancing and has it analyzed. He knows that if enough people partake of the narcotic, it could shift the psychic consciousness of the entire country. The Mammonites are committed to exerting their control over this Fifth World reality, should it ever occur. He knows now that Brother Christopher is the son of White-Buffalo-Woman and may serve as some sort of metaphysical messiah for the Fifth World cause.

Retrieved from "https://heykidscomics.fandom.com/wiki/Ghostdancing_Vol_1_4?oldid=1687332"
Community content is available under CC-BY-SA unless otherwise noted.