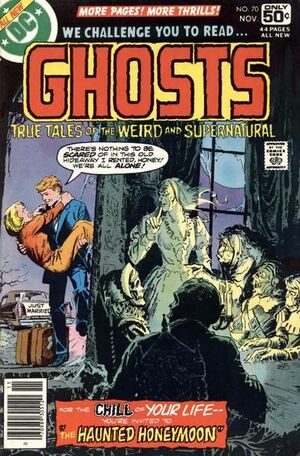 Appearing in "Invasion of the Spectral Swarm"Edit

Synopsis for "Invasion of the Spectral Swarm"Edit

A farmer sprays a swarm of bees with insecticide, Which results in the vindictive horde of drones to haunt and invade his home as phantasms.

A newlywed couple honeymoon at a legendary haunted house.

Synopsis for "The Haunted Barbarian"Edit

Retrieved from "https://heykidscomics.fandom.com/wiki/Ghosts_Vol_1_70?oldid=1427651"
Community content is available under CC-BY-SA unless otherwise noted.