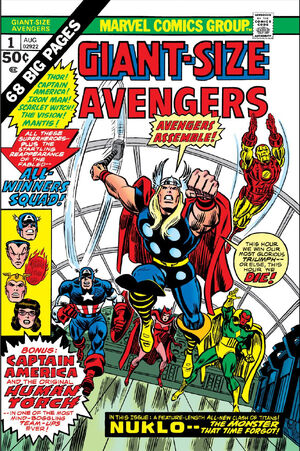 An intruder at Avengers Mansion brings together Captain America and a group of other Avengers to meet the invader trying to get hold of a Chrono Module device left in the Avengers care. To everyone's surprise, the intruder turns out to be Cap's old World War 2 ally, the Whizzer. After brief battle, the Whizzer tells the Avengers of the final days of the All-Winners Squad, and their battles against Isbisa, Future Man and Madam Death. Whizzer then tells of how after the group disbanded he and Miss America were married and joined the CIA, and during a nuclear test both were exposed to powerful radiation. When Miss America got pregnant, their son proved to be lethally radioactive and it is he who was put into the Chrono Module, and that the Whizzer had come to prevent his mutated son from escaping it's confines.

Meanwhile, the Avengers split up into groups to find Nuklo, and amazingly each group finds their own Nuklo to battle, the creature having split into three parts. The Avengers manage to battle each counterpart into fleeing until the three merge back together and attack the Avengers at full strength. Although the Avengers are easily defeated by Nuklo, Whizzer and Scarlet Witch arrive to save the day. The Witch uses her mutant hex power against Nuklo which appears to kill the creature. Afterwards, Whizzer is returned to the hospital to recover, where he asks Scarlet Witch to look after her brother.

Appearing in "The Magician and the Maiden"Edit

Synopsis for "The Magician and the Maiden"Edit

Appearing in "The Ray of Madness"Edit

Synopsis for "The Ray of Madness"Edit

Retrieved from "https://heykidscomics.fandom.com/wiki/Giant-Size_Avengers_Vol_1_1?oldid=1432103"
Community content is available under CC-BY-SA unless otherwise noted.