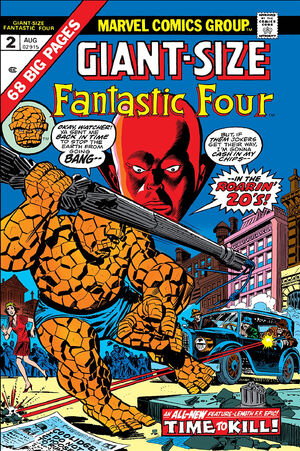 While in orbit above the Earth testing out a new space shuttle for NASA, the Fantastic Four witnesses a bright flash of light that envelops the entire planet. This causes Ben to be blinded and they crash land back on Earth. However, they find that the entire planet has regressed into a prehistoric jungle. They are confronted by the Watcher who explains that someone had accessed Dr. Doom's time machine within the Baxter Building and altered history in such ways that it caused all of humanity to never develop into the society it's in today. The FF agree to being sent back in time to prevent these things from happening.

The Watcher sends Reed and Johnny back in time to the days of the Revolutionary War, disguising themselves as locals from that era, the two quickly learn where history changed in this reality: George Washington has been captured by the British army, and the Americans are at risk of winning the war. Attacking the British military base, Mr. Fantastic and the Human Torch easily free Washington from his prison. After getting Washington to safety, they learn that he was captured due to the appearance of a man who appeared in a bright flash of light. This event spooked his horse enough to buck him off and be captured by the British. With Washington free, Reed and Johnny are transported out of that time, leaving Washington to resume his proper role in history.

Medusa and Thing are transported to the 1930's prior to the depression, where Ben is amazed to find that he's been changed back into his human form. Stealing some clothing, they begin to look for point where history has changed. They find it in a speak-easy where they find Willy Lumpkin, the FF's mailman sitting with some gangsters. Realizing that Willy may tell them about the financial future of the world during this time and thereby give organized crime another edge during the depression, Ben and Medusa grab Lumpkin and run. The mobsters chase after them as Ben steals a car and tries to drive away. However he crashes the vehicle, but then changes back into the Thing and makes short work of the mobsters tailing them. With Willy secure, the trio are transported out of that point in history.

The FF and Willy are not returned to their own time however, they are brought to the timeless realm of Tempus. Tempus tells them all he had manipulated events in the hopes that all the time paradoxes created by Willy would cause all reality to crumble apart and thus end his millennial long existence. Desiring to destroy the Fantastic Four, they find that Tempus' control over time can cause them to rapidly age. However, they manage to defeat him by tripping him up causing him to shatter. Soon after the world of Tempus crumbles as well, however the Fantastic Four and Willy are transported back to their own time, everything seemingly restored back to normal. The Watcher then erases Willy's memories of the whole situation before departing.

Appearing in "The Fantastic Four, Versus the Red Ghost and His Indescribable Super-Apes!"Edit

Synopsis for "The Fantastic Four, Versus the Red Ghost and His Indescribable Super-Apes!"Edit

Retrieved from "https://heykidscomics.fandom.com/wiki/Giant-Size_Fantastic_Four_Vol_1_2?oldid=1431877"
Community content is available under CC-BY-SA unless otherwise noted.