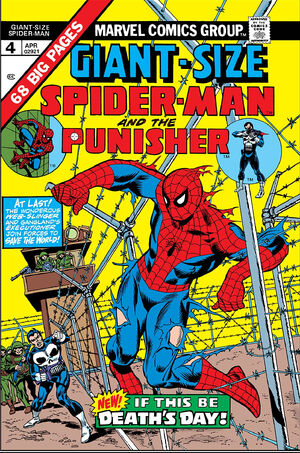 Appearing in "To Sow the Seeds of Death's Day!"Edit

Synopsis for "To Sow the Seeds of Death's Day!"Edit

Web-slinging through the city, Spider-Man answer the call of a woman on the verge of being kidnapped by masked thieves. Spider-Man manages to fight most of them off, however when one tries to get the drop on him from behind, he's shot from a snipers bullet fired by the Punisher. After the girl is turned over to paramedics, the Punisher rides his battle van back to his secret hideout. When he opens the back he finds Spider-Man had deduced that the Punisher was involved in his save and hitched a ride.

The Punisher explains that he was there to follow the kidnappers who were kidnapping the girl to use an experimental (and lethal) gas. When Spider-Man realizes that the Punisher would have let the woman get kidnapped and potentially exposed to the gas to further his own ends, Spidey lashes out until the Punisher neutralizes him with a tranquilizer.

The Punisher then takes Spider-Man (who later revives) to the headquarters of Deterrence Research Corporation, the makes of the gas, to take out it's owner Moses Magnum. Sending Spider-Man up the side of the building to local and capture Magnum, the Punisher provides a distraction by attacking the guards in the building. The plan fails as Spider-Man walks in on a business meeting Magnum is having with men interested in buying his gas, and it turns out Magnum had more men that the Punisher accounted for. Spider-Man is easily over powered, and the Punisher does not get up to the main floor of the building in time to prevent Magnum and his people to flee from the building in a helicopter with Spider-Man as their prisoner.

Taken to another country and put into the prison camp Magnum setup to test his gas on unwilling subjects, Spider-Man angers Magnum, who unmasks him and has Spider-Man's picture taken so that he can learn his true identity later. However, the Punisher, anticipating this gave Peter a make-up kit to alter his appearance. After being returned to the other prisoners, Spider-Man removes the make-up and then facilitates the Punisher's entry into the compound.

The two then stage an attack against Magnum and his men. Taking the battle directly to Magnum himself, the Punisher shoots a canister on Magnums hand's which contains the deadly gas. Spider-Man and the Punisher flee the room and close it off, presuming that Magnum died in the resulting release of the gas.

Later, after the United Nations have secured the area and are taking people home, the Punisher thanks Spider-Man for his help, before departing in a separate helicopter.

Appearing in "The Wondrous World of Dr. Strange"Edit

Synopsis for "The Wondrous World of Dr. Strange"Edit

Retrieved from "https://heykidscomics.fandom.com/wiki/Giant-Size_Spider-Man_Vol_1_4?oldid=1431906"
Community content is available under CC-BY-SA unless otherwise noted.