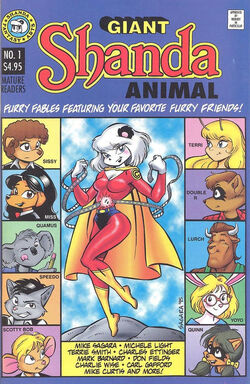 Giant Shanda Animal is an annual anthology that was the first widely distributed comic to be published by Shanda Fantasy Arts in 1996.

Each issue typically contains 48 pages featuring a collection of stories based on Shanda the Panda from various writers and artists. The lead story is typically a spoof of some genre, such as The Lord of the Rings, or Tenchi Muyo, with the cast of Shanda playing the parts.

Retrieved from "https://heykidscomics.fandom.com/wiki/Giant_Shanda_Animal?oldid=219875"
Community content is available under CC-BY-SA unless otherwise noted.