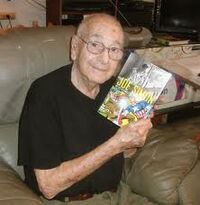 Ginger Lopez is a character added to the cast of Archie stories in the early 2000s. She was intended to replace Cheryl Blossom, resulting in several stories featuring Cheryl being reprinted as Ginger stories. In time the rather pointless cloning of an existing character was dropped. Cheryl returned and Ginger was developed as a more original character. She is a relatively affluent New Yorker who recently moved with her family to Riverdale. Ginger is teen editor of a magazine and a nascent fashion designer, having already featured her own clothes lines in fashion shows. She is usually depicted as friendly to Betty Cooper and Veronica Lodge. She has been on occasion featured as their rival for the attention of Archie Andrews.Edit

Betty is a nice, smart, sweet, and funny girl with blonde hair. Her eyes are typically described as blue, but are only drawn as such in later years and during close-up shots of her face; at all other times, her eyes are simply drawn with black ink.

Retrieved from "https://heykidscomics.fandom.com/wiki/Ginger_Lopez?oldid=112420"
Community content is available under CC-BY-SA unless otherwise noted.