Giselle Villard is the main character in the American comic book Mystic, published by CrossGen Entertainment. She is one of the many Sigil-Bearers seen throughout the CrossGen Comics.

Giselle starts out very light-hearted and frivolous, with a devil-may-care attitude. She doesn't want magical power and is not really interested in learning magic. Her desire is to have a good time in life.

The power of the Sigil and the sudden absorption of the spirits of the guild masters is a very unpleasant shock for Giselle. The Mystic series revolves around her efforts to come to terms with her new abilities and responsibilities. 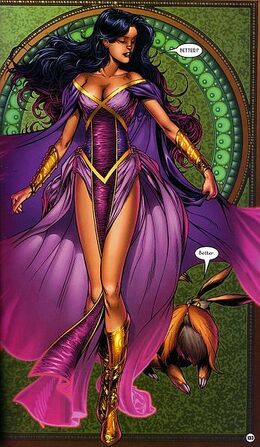 Giselle is a reluctant hero who is given a great power after an earlier life of modest living. Suddenly she becomes a great power in a complex world which she has previously not cared much about, the world of the magic guilds. Her main guide is her older sister Genevieve, who does know a great deal about the magic guilds and magic spells. Genevieve is unhappy at not gaining the wisdom of the ancient guild leader of the Nouveau guild but she learns to accept Giselle's new position and helps defend her against the plotting and attacks by the other guild leaders.

With the failure of their first effort to kill Giselle, the guild leaders (with the exception of Astral and Nouveau) break the prison that confined Animora. This sets in motion a conflict which lasts for the next twelve issues between Giselle (and her sister Genevieve) against Animora and the other guild leaders. Darrow, sent by Ingra to manipulate Giselle, rapidly switches sides and supports Animora. With the reluctant aid of the spirits of the former guild leaders, Giselle is able to defeat all her enemies (#14 and #20) but at a cost.

After her second defeat, Animora was able to establish a psychic link to Giselle and over time this turned into a form of possession. Eventually Animora brought Giselle into direct conflict with Ingra and after a battle - in which Ingra easily defeats Giselle - Ingra breaks Animora's hold over Giselle and imprisons Animora (#23). Part of the reason why Ingra is able to defeat Giselle is that due to Giselle's recent behavior, the spirits of the guild leaders refuse to help her. Giselle, without their aid, finds that her knowledge of magic is very poor. She resolves to become a master of magic and starts with learning the magic of the Shaman's guild (#26).

Giselle is a very attractive woman and many men fall for her. Among her admirers is a handsome artist named Thierry Chevalier. They enjoy a relationship, but the romance falls apart when Giselle falls under the mental domination of Animora. Thierry ends up transferring his affections to Genevieve (#24).

Because of the position of Ciress in the galaxy, the planet has an extremely high amount of cosmic energy and is responsible for the vast amounts of magic used on Ciress. This energy also augments Giselle's powers to a certain degree making her more powerful.

Retrieved from "https://heykidscomics.fandom.com/wiki/Giselle_Villard?oldid=9316"
Community content is available under CC-BY-SA unless otherwise noted.