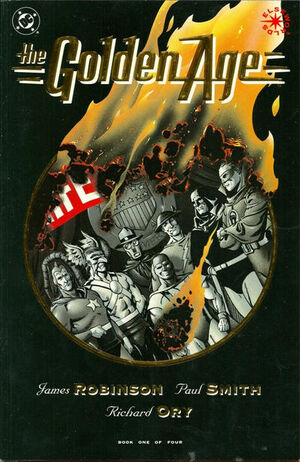 It is the end of World War II, and with it the beginning of the end of the glory days for both the Justice Society and the All-Star Squadron as the teams break up and the various members face their own personal crises in the aftermath. Johnny Chambers (Johnny Quick) is now divorced from his wife Libby Lawrence (Liberty Belle) and is putting together documentaries based on "mystery men". Libby is currently residing with Jonathan Law (Tarantula), who is struggling with both alcoholism and writer's block. Alan Scott (Green Lantern) is choosing to retire from his duties as a superhero and is instead focusing his energies and attention on his Gotham Broadcasting Company radio network amid growing accusations of his workers being card-carrying Communists. Rex Tyler (Hourman) is finding out that his Miraclo power pills are no longer working. Ted Knight (Starman) is holed up in a sanitarium following a mental breakdown. Paul Crane (Robotman) is losing his humanity, and Daniel Dunbar (Dyna-Mite) is unable to stay in college as he finds himself lost without his deceased partner in crimefighting TNT. Paul Kirk (Manhunter) finds himself pursued by gunmen and haunted by nightmares. Meanwhile, America is honoring its hero Tex Thompson (Americommado) as he returns to the States in triumph for defeating Adolf Hitler, and is now beginning his campaign for creating a better America. To that end, he chooses Daniel Dunbar for his purposes as well as Robotman and Al Pratt (The Atom).

Retrieved from "https://heykidscomics.fandom.com/wiki/Golden_Age_Vol_1_1?oldid=1450896"
Community content is available under CC-BY-SA unless otherwise noted.