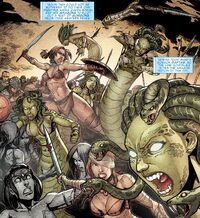 Base Of Operations
"Medusa-Land" Monarchy beneath Greece;[1] Amazon nation;[1] possibly another planet[1]

The Gorgon sisters Stheno ("strength"), Euryale ("wide-stepper") and Medusa ("queen"), were the children of the primevale sea god/demon Phorcys and Cetus.[1]

They were considered beauties, and worshipped Olympian gods rather than the Elder God Set, their grandfather. Medusa, considered the most beauteous of the three sisters, was a chaste priestess of Athena on Atlantis. Medusa was flattered by Poseidon's affection for her, and succumbed to his advances on Athena's altar, enraging her.

Athena cursed the Gorgon family as snake-haired creatures, possibly revealing their true nature (the Gorgons' snake-like features are shared by their aunt Ishiti and her Man-Serpents descendants).

Gorgons lived on Western Peaks of Atlantis and warred with the Atlanteans for years, until the Atlanteans contracted Queen Myrina of the Amazons to involve her nation in the conflict. The Amazons captured many Gorgons during the battle, their descendants becoming Amazon warriors.[1]

The "Brown Man of the River" was a giant Gorgon who claimed land between Pictish territory and Aquilonia and was killed by ancient Picts.

By 10,000 BC, the Gorgons were well-known, and their threats was used by impersonators such as Delores Garde (which was defeated by Red Sonja of Hyrkania.

The "Brown Man of the River" was resurrected by Pict shaman Goranda Zek who ordered him to kill Pict king Dekanawatha Blood-Ax (Earth-616) and King Conan of Aquilonia, lured in the river while looking for their sons Akenak and Conn.[1]

Medusa was apparently immortal and survived into the 14th century BC on the island of Cisthene, until Perseus, equipped with Athena's mirrored shield, the sandals of Hermes, an helmet of invisibility belonging to Hades and possibly (by some accounts) a magic pouch and a diamond sickle from Hephaestus or the Argos-slaying blade from Hermes, tracked her to Cisthene, decapitated her and fled with the still living head before he could be stopped by her sisters. The legend states the winged horse Pegasus sprang from Medusa's body while her blood created a race of snakes.

Perseus used the head to petrify others, including, temporarily, the Titan Atlas, Phineus (promised to Andromeda, Perseus' love), an by some accounts Phineus' army and Andromeda's parents, and King Polydectes of Seriphos, along with his nobles. He also apparently turned the king's island to barren rock. Perseus eventually gave Athena the head, which was ultimately left in Greece.

At least 300 years ago, a group of Gorgons somehow left Earth and founded a civilization on another planet. They claimed to be descendants of Gorgons who witnessed the battle opposing Perseus and Medusa.[1]

After Medusa's death, her daughter relocated to subterranean world below Athens - Medusa-Land. Medusa's daughter, who took her mother's name, became the ruler of the city. Her descendants, each took the name Medusa and ruled the city after the deaths of their mothers.Empty citation (help)

Half a century after Medusa's death later King Kreon of Pylos sent Hercules to retrieve the gold of Medusa from the Isle of Fear. On the island he encountered Medusa, alive and well, concealing her face behind a hood. Hercules and the Argonauts ended up slaying her once again. With Medusa's death, Jason and all her prior victims reverted back to flesh.[2]

In the 1920's, the Gorgon May Dusa became a famous photographer.[3]

During the same era Professor Lansing discovered the Medusa-Land and attempted an expedition to discover it's riches.Empty citation (help)

Some time later Medusa moved to Paris, France with a blind man from Greece, her husband. He wins an art competition by using one of Medusa's victims as an art piece.Empty citation (help)

At some event Medusa or one of her descendants became imprisoned by a curio shop owner. A robber was turned to stone upon discovering Medusa behind a vault door. The shop owner placed the criminal's stone body in his shop. Some time later, a customer wanted to know the story behind the "statue", and the owner told him; the customer did not believe him, but when the owner challenged him to open the door himself, he fled in terror, convinced.Empty citation (help)

Years later Mr. and Mrs. Grey bought the cursed European castle with Medusa imprisoned inside. Mr. Grey unknowingly released Medusa from her prison, but she failed to turn to stone. Thinking that her own curse had been somehow lifted, she looked at herself in the mirror turning herself to stone.Empty citation (help)

Medusa was brought back to life via the Hand's resurrection ritual alongside with number of Ancient Greek monsters to be used by Matsu'o Tsurayaba against Wolverine and Hercules.[4] Medusa's attack was unsuccessful and resulted in beheading. Ironically enough, her head was uses as a weapon against another resurrected Ancient Greek monstrosity, the Kraken.[5]

Sometime thereafter Medusa returned, only to be beheaded by Dracula once again. He then used her visage to turn Shiklah to stone.[6] Upon defeating Dracula after a fierce battle, Deadpool struck a deal with Medusa to reverse the petrification of his wife in exchange for helping her get a new body, which turned out to have previously belonged to Frankenstein's Monster.[7]