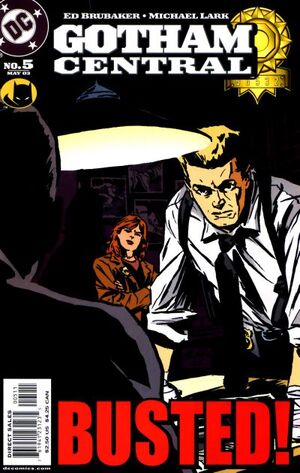 Marcus Driver discovers some strange inconsistencies with the Lewis murder case which lead him to connect it with the simultaneous Firebug investigations. Bonnie Lewis' babysitting client, Harlan Combs, was a thrill-seeker and decided to purchase Joseph Rigger (Firebug)'s suit and equipment to get some kicks as an arsonist, a costumed criminal in Batman's city. However, when Bonnie stumbled across it, he killed her to stop her spilling the beans. With both cases brought to a satisfactory conclusion, Detective Driver cannot resist turning on the Bat-Signal to tell Batman that they captured a costumed criminal without his help, something most of them wish happened far more often than it does.

Retrieved from "https://heykidscomics.fandom.com/wiki/Gotham_Central_Vol_1_5?oldid=1428508"
Community content is available under CC-BY-SA unless otherwise noted.