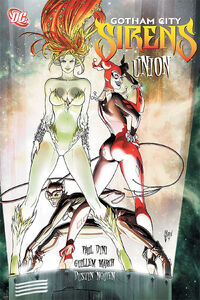 Union is a Batman Family storyline written by Paul Dini and illustrated by Guillem March, featuring the debut of Catwoman, Harley Quinn and Poison Ivy as the Gotham City Sirens. It's published as part of the Batman: Reborn crossover, establishing the Gotham City status quo following Battle for the Cowl and Bruce Wayne's disappearance during Final Crisis. The other stories published simultaneously include Batgirl Rising, Batman Reborn, The Deep, Elegy, The Grail, Hush Money and Long Shadows. This is the first arc on Dini's Gotham City Sirens volume, followed by his second arc Songs of the Sirens.

Catwoman is walking through the streets of Gotham still weak from her last encounter with Hush, when she's attacked by a new villain named Boneblaster trying to make a reputation for himself. She's rescued by Poison Ivy, who takes her back to the Riddler's apartment where she's controlling him and staying with Harley Quinn. Boneblaster arrives again to challenge them, but he's defeated and wakes up the Riddler just in time for the girls to leave; Riddler beats the shit out of him. Catwoman suggests that the three girls begin working together, and the Broker finds them a new home at the abandoned Gotham City Shelter for Cats and Dogs. Ivy is suspicious that Catwoman has gotten weaker, and hits her with pheromone control then demands to know the real identity of Batman.[1] It's explained in flashback that Talia al Ghul helped Catwoman repress Bruce Wayne's identity through meditation so his enemies could not take it from her. Ivy apologizes for controlling her and Harley goes out shopping, where she meets Hush surgically disguised as Bruce Wayne and saves him from a kidnapping attempt. Hush realizes he can use Harley to help take revenge on Catwoman, and kidnaps her instead.[2] They ask the Riddler to help them track down Hush, but he's busy hunting a serial killer. Riddler teams up with the new Batman for the first time and they find the culprit is a woman known as Conundrum trying to replace him. Batman arrives to rescue the Riddler and the two men develop a begrudging respect for each other.[3] Hush is seen gallivanting around town as Bruce Wayne with Harley to lure out Catwoman and Ivy. He intends to push her off a tall building, but they're attacked by a man claiming to be the Joker. Catwoman and Ivy save their friend from Hush, but later they're attacked in their own home by an exploding Jokermobile.[4]

The Carpenter is hired to repair their place and the girls decide to go after Joker for revenge. They try to kill him but it's revealed that he's really Joker's midget sidekick Gaggy in disguise. Gaggy incapacitates the other girls and then tries to murder Harley for usurping his position.[5] Harley escapes her binding and the others escape a death trap with the Carpenter's help. Gaggy tells his sad backstory about how the Joker threw him away, and Harley realizes she's been similarly discarded. Gaggy is strapped to a rocket and sent into the air while the girls leave, but he survives and swears revenge.[6]

On Christmas the girls each celebrate their own way. Catwoman takes down some knife-wielding Santas and visits Dick Grayson in Wayne Tower for drinks. Poison Ivy visits Central America and slaughters drug lords who are damaging the jungle. Harley goes home to visit her dysfunctional family and visits her father in prison, although she isn't able to get back on good terms the way she hoped she would. When Harley gets back to the shelter she finds that Carpenter has just finished renovating, and the girls spend their first Christmas together in their new home.[7]

Retrieved from "https://heykidscomics.fandom.com/wiki/Gotham_City_Sirens:_Union?oldid=1564574"
Community content is available under CC-BY-SA unless otherwise noted.