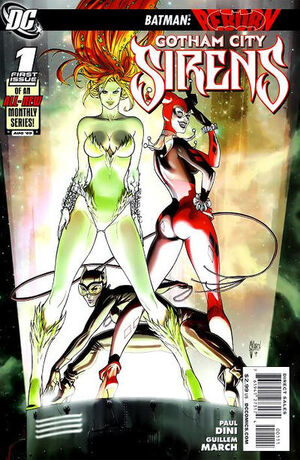 This all-new series features the bad girls of Gotham City! Catwoman, Poison Ivy and Harley Quinn are tired of playing by other people's rules regardless of which side of the law they're on. These tough ladies have a new agenda that's all their own, and they'll use any means necessary to pursue it. But can they get along and work as a team? And who will get hurt along the way? DETECTIVE COMICS and STREETS OF GOTHAM writer Paul Dini kicks off this brand-new ongoing series with amazing artwork by Guillem March (JOKER'S ASYLUM: POISON IVY, GOTHAM GAZETTE).

Retrieved from "https://heykidscomics.fandom.com/wiki/Gotham_City_Sirens_Vol_1_1?oldid=1674644"
Community content is available under CC-BY-SA unless otherwise noted.