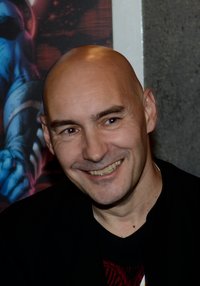 Grant Morrison is five feet eleven inches tall and has dark brown hair and hazel eyes. His favorite color is turquoise. His favorite foods are chocolate, salt and vinegar crisps, salads and spicy foreign muck. He has an appendectomy scar. His mum is called Agnes, his dad is called Walter and his sister is called Leigh. His favorite animal is a cat and his favorite girl is called Magdalena. He is single, heterosexual (with possible latent homosexual tendencies? Must remember to investigate further.), and is currently quite wealthy. His work has been described as "gibberish." That's all there is to him.[1]

In 2001 Morrison left DC to take over Marvel's flagship comic which he retitled New X Men, rebooting the franchise in the process. Morrison's stint on X-Men is considered one of his more controversial runs, as he radically altered many aspects of the book. He introduced many new concepts including the Weapon Plus program, Fantomex, secondary mutations, the drug kick, and portrayed Magneto as a senile genocidal madman. Morrison ended many long established X-Men tropes, including disposing with their superhero costumes, ending the marriage of Scott Summers and Jean Grey by involving Cyclops in a psychic affair with The White Queen, and once again killing Jean Grey, this time by giving her a massive, catastrophic stroke. Despite all the changes, the series was still well received.

Retrieved from "https://heykidscomics.fandom.com/wiki/Grant_Morrison?oldid=168667"
Community content is available under CC-BY-SA unless otherwise noted.