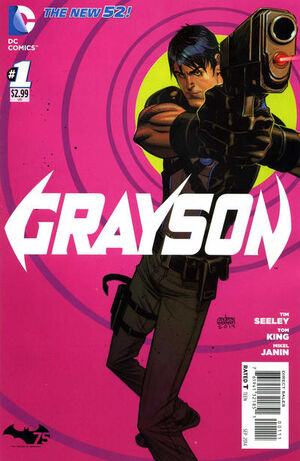 With godhood must come transparency. Power cannot be masked.

Dick Grayson has taken on a number of roles in his lifetime, from acrobat to super-hero. Now, though, he is a spy. In Russia, he deftly leaps onto the roof of a moving train on the Trans-Siberian Railway. His handler, known as "Matron," informs him that she'll be impressed when he makes it inside - a challenge that will require defeating the gunman who crawls across the roof toward him. From afar, Black Oak reports back to his superiors that the impressive spy who has just defeated a Russian Foreign Intelligence officer atop a train is en route to the asset.

Matron, meanwhile, watches covertly as her target - Ninel Dubov - seems to be showing resistance to her attempt to have him drugged. He has fallen in with an attractive young woman who prevented her from further attempts, and Matron warns that the pair are now heading Dick's way. The young woman leads Dubov to the train's bar, where Dick is already waiting. He insinuates himself upon their conversation, trying to woo the girl away from him and then feigning an accidental spill of his wine on her white dress. Hurriedly, the girl rushes to the washroom to clean up and check back in with her partner - who happens to be the spy that Dick knocked out on his way into the train. As she leaves the rest room, the woman suddenly feels faint, and Matron comments that it is because the wine that was spilled on her chest contained a paralytic agent.

In the meantime, Dick had to drag a sleeping Dubov through the bathroom window and out onto the roof of the train again. He had to nerve pinch the man into unconsciousness - despite the ready availability of a hypnos implant that he admittedly is not confident enough to use. Unfortunately, once Dick gets Dubov off the train and to the drop point, he comes under fire by more Russian Foreign Intelligence agents. As Dubov begins to wake, Dick is forced to use his hypnos implant to convince the man to help him. The tactic works, and soon, the pair are running toward a nearby nuclear silo.

In the silo, Dick is confused when Dubov suddenly collapses. Sensing something isn't right, he searches for the source of the attack and discovers Midnighter has tranquilized Dubov. The man warns that Dubov is dangerous, and better off dead. He sees that Dick was well trained, and demands to know just who he is working for. When Dick tries to use his hypnos implant on him, he realizes that his adversary must be working for Spyral - which means that he is there merely to exploit Dubov. Tired of going easy on him, Midnighter prepares for a real fight, but he is instantly tossed through the wall of the silo by Dubov, who is still bound by hypnosis to help Dick.

Unfortunately, Dubov overheard the conversation, and the radioactive energy building within him is at its peak. Dick realizes that Dubov can't be extracted in this state, and he will have to find a way to burn off that energy. As such, he admits that he is merely using Dubov, and angers him. The man attacks using his radioactive blasts, and carefully Dick leaps out of the way. When the energy is exhausted, Dick grabs him up and carries him to the extraction point.

Back at Spyral headquarters, Dick and Matron are congratulated on their fine work by the company's leader, Mister Minos, who promises that Dubov will have his dangerous implant removed and be placed at a resort in Sochi.

Since joining Spyral, Dick has been living in a private dorm at Saint Hadrian's Finishing School for Girls. That night, he Jerry-rigs his clock-radio into a transmission device to report back to Batman, but he is interrupted in his report by a knock at the door from Matron. She is Helena Bertinelli, and though Dick is new to the job, she is impressed by his skill with the hypnos implant. To his surprise, she moves in seductively, and he has to snap himself out of it in order to comply with Spyral's rules that there are to be no relationships between agents. She smirks in response, pointing out that she, at least, doesn't need hypnos.

Elsewhere, a Spyral scientist called Frau Netz reports back to Mister Minos that an organ she harvested from Dubov is indeed part of the Paragon Protocol. Her father had once used Spyral to kill super-humans, but Mister Minos intends to use it instead as a means of discovering their identities. After all, with godhood must come transparency. He has already used it to discovered the identities of many of the Earth's heroes.

Retrieved from "https://heykidscomics.fandom.com/wiki/Grayson_Vol_1_1?oldid=1433396"
Community content is available under CC-BY-SA unless otherwise noted.