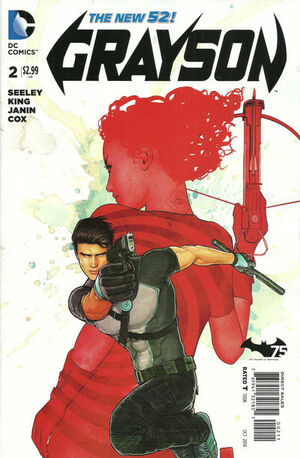 Which of the gods baptized you in his blood and blessed you with such power? And how much longer until Spyral brings heavens crashing to Earth?

At the St. Hadrian College in England, Helena Bertinelli trains young women to shoot with the crossbow, and realizes too late that The Hood has got into the line of one of her students' fire. Carefully, she fires her own bolt that knocks the student's off course. The Hood is obviously not himself, though, and he collapses onto the ground.

Meanwhile, in Gotham City, Batman is busy taking down a biker gang called the Cycles of Violence when he receives a secure call from Dick Grayson. He reports that the scavenger hunt will proceed, and he is being sent out later to collect. Bruce inquires as to how Dick is doing, and he admits that he's doing well for a dead man. Bruce must also admit that the funeral was nice. Dick tries to ask after the rest of his family, but Batman warns that their call is more likely to be intercepted the longer they talk. Dick concedes, promising to be done with this mission before the flowers on his own grave wilt.

As he steps out into the hall, Dick encounters Matron, who accompanies him to their debriefing. Dick quips that she must have been reading his files to get more of him after trying to de-brief him, the night before. Coyly, she claims to know nothing of what he's talking about.

Elsewhere, Midnighter attempts to get a visual on the man who duped him out of a target in Ninel Dubov a few nights previous. While he managed to steal footage from an American drone, the images are warped on the man's face. He learns that the footage contains an embedded message. It reads, "Welcome to the spider's web..." Before he can hear anymore, he destroys the computer in anger, stopping playback. Calmly the Gardener reminds him not to treat the God Garden's equipment like an enemy. Grumpily, Midnighter insists that there must be a way to get around Spyral's technology. Gardener warns that to further experiment with his brain would spurn the principles and objectives of the Garden, not to mention kill him. She offers him a different case to work on while he's on leave from Stormwatch.

He refuses, explaining that his eugenic programming causes him to ruminate on his mistakes to his detriment. He insists that he will find a way to force his brain to remember what even a camera can't in that Spyral agent's face. One of the benefits of his super-brain is that he can play out every scenario, and he has played out his next fight with the Spyral agent, and things don't end well for the spy.

Dick and Helena meet with Mr. Minos for their debriefing. He announces the return of Agent 24 - also known as The Hood - who was on assignment following leads to do with another black market bio-weapon. He tracked the device to Farmington, Leicestershire. For whatever reason, a Biomech Digestive Processor ended up in the small farming community. Whoever has it wanted to hold it badly enough that the Hood suffered a number of serious wounds which caused him to fall into a coma - and short a few fingers and toes. Minos would like Helena and Dick to take up the Hood's investigation.

As they prepare for their respective roles in the mission, Helena dismisses Dick's good humour, reminding that the Hood is a flippant fellow too - and now he's in a coma. While she will be investigating tales of missing sheep in the rain, Dick has been tasked with canvassing locals in the town's pub.

Within three hours, Dick is under attack by a woman who has super-speed, somewhere beneath the village. She manages to escape him in the tunnels, but Helena soon catches up to him, explaining that she found the sheep's bones in a cave that connected with this tunnel. Dick catches her up, explaining that he was making friends at the pub when a woman appeared and picked him out of the crowd. She claimed her name was Jane and played it cool. Suddenly, though, she intimated that she knew what he had come for and warned him to keep quiet and to follow her if he wanted the stomach. He followed her to the basement of an old church, and a tunnel hidden behind the organ waited here. When it got dark in the tunnel, she attacked him with an unexpected speed.

Ahead, Helena and Dick discover a bomb shelter from WWII, full of uniforms belonging to a number of espionage groups' agents. Trying to break into the old salvaged computers, Helena learns that the woman was Poppy Ashemoore, formerly a biologist in London. Her hard drive contains recipes and links to conspiracy websites. She suspects that the woman was a member of the group called T.H.E.Y. Apparently, having worked for British Secret Intelligence she later stole their files, moved to the country, and killed a bunch of shadow operatives in order to protect a mechanical bowel. Helena adds that she didn't just kill those agents - she ate them.

Ashemoore returns suddenly, claiming that she hadn't wanted to do what she did, but to ensure human survival, she needed to use the organ. It would be necessary to survive in the future. Without any test subjects, she used it on herself. However, the metabolic shift it caused meant that the faster she moved, the faster she aged, unless she consumed more calories. The spies kept coming, and she had to get rid of their bodies - and she was just so hungry. She speeds past Dick, taking a bite out of his arm, to his horror.

Helena orders Dick not to strike at her, explaining that they can't risk damaging the implant, and they can't afford to start over if she escapes. So, she intends to offer Ashemoore a job with Spyral instead - in exchange for the device. Dick is disgusted with the plan, reminding that Ashemoore is a cannibal who has killed people. Helena insists that Ashemoore is an asset. Anticipating Dick's rebellion, Helena uses her Hypnos implant to knock him out before formally offering Ashemoore the job.

At her next class, Helena returns to explaining the similarities between a Hadrian's woman and a crossbow to her students. From the corner of her eye, she sees Dick watching her nervously from behind a tree, knowing that he doesn't approve of her morals.

Elsewhere, Dr. Netz removes the stomach from Dr. Ashemoore's body, fitting her with a less demanding substitute. Mr. Minos, meanwhile, carries the stomach away, wondering which metahuman's blood was used to create it, supposing that the likely option is The Flash - who is an 87% match.

Dick reports back to Batman, revealing that the scavenger hunt was successful. Mr. Minos remains a mystery to him, though. Before signing off, Dick wonders if Bruce remembers the time that he, Barbara and Alfred all went on a picnic at Aparo Park. Alfred had been trying out a hair-piece, and a gust of wind blew it 'most of the way off, causing it to flap around in Barbara's face - but she didn't say anything out of politeness. Laughing, Bruce admits that he remembers it like it was yesterday.