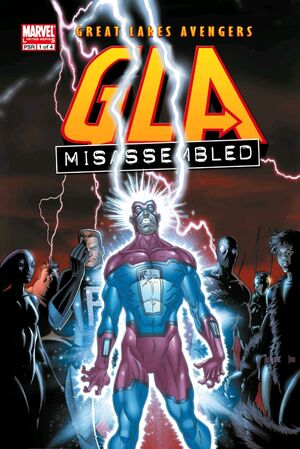 Like all four issues of the mini-series this issue begins witha brief talk from Squirrel Girl and Monkey Joe, they are joined by Grasshopper and eventually get to the point of insulting the reader.
The Story.

The story starts at 5:28 pm on the 13th of July with Mister Immortal being shot in the head. We then flash back to the origins of Mister Immortal. Just after he was born, Mister Immortal watched as Deathurge took his mother away forever, as far as anyone else was concerned, she died. As Mister I grew up Deathurge became like a friend that only he could see, Deathurge would cause him to end up in dangerous situations, such as sitting in the center of the road and playing with crocodiles. Eventually he burnt his own house down, killing his father and he saw Deathurge take him away. As Mister I grew up with his horrible foster parents, he fell in love with their daughter, however, she eventually committed suicide. He jumped out of the window of a skyscraper but didn't die, and thus discovered he was immortal. He became the hero Mister Immortal but had little success, except for being repeatedly killed by criminals. He posted an ad for members of a new team, the GLA. He found four other members and Leather Boy, who misinterpreted the ad. Mr I fell in love with teammate Dinah Soar who only he could understand. A while later they were called to a scene of a fight by Big Bertha only to be removed to the sidelines by the Avengers. When Mister I realized the team was practically useless beside the real Avengers, he was about to call it quits, but then the Scarlet Witch went mad. The Great Lakes Avengers then decided to fill the void left by the collapse of the true Avengers in the wake of the House of M. Their first battle was against Maelstrom, but in the battle Dinah Soar was killed and Mr I watched as Deathurge took her away.

Retrieved from "https://heykidscomics.fandom.com/wiki/Great_Lakes_Avengers_Vol_1_1?oldid=1613281"
Community content is available under CC-BY-SA unless otherwise noted.