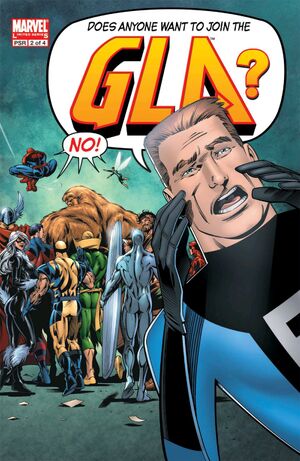 The Story Starts with the funeral of Dinah Soar, at the funeral Deathurge appears, the other members think Mister Immortal has gone crazy due to the fact they cannot see Deathurge who he is shouting at. Meanwhile Maelstrom hires Batrocs Brigade to steal something for him. Meanwhile at a moedlling shoot, Ashley Crawford (aka. Big Bertha is considering giving up the team. Back at the HQ, Flatman and Doorman go on a membership drive. Elsewhere, Grasshopper comes across Batrocs Brigade breaking into the building and decides tot ry and stop them. At the Thunderbolts HQ, Flatman tries to convince Swordsman to join the team, mistaking him for Hawkeye but is rejected. Meanwhile Doorman has no better luck trying to recruit Moon Knight. They are also given the same speech by Spider-Man, Daredevil and Wolverine, they fail to recruit Energizer of the Power Pack. Living Lightning almost jpins until he realises GLA stands for Great Lakes Avengers instead of Gay/Lesbian Alliance. They ask many other heroes including Wonder Man, Falcon (Sam Wilson), Nightcrawler, Black Bolt, Awesome Andy, Iron Fist and Luke Cage who replies with "Sweet Christmas NO!". They eventually recruit Squirrel Girl and Monkey Joe. They rush to aid Grasshopper with the robbery and ask him to join the team, Grasshopper accepts shortly befor Zaran throws a dagger at his head, Doorman tries to take the Dagger for him but it passes through Doorman into Grasshopper, killing him. Deathurge then appears and takes Grasshopper away. At the end of everything: Flatman is being pulled into a portal and dragging Bertha with him, he decides to be a hero and let go.

Retrieved from "https://heykidscomics.fandom.com/wiki/Great_Lakes_Avengers_Vol_1_2?oldid=1679151"
Community content is available under CC-BY-SA unless otherwise noted.