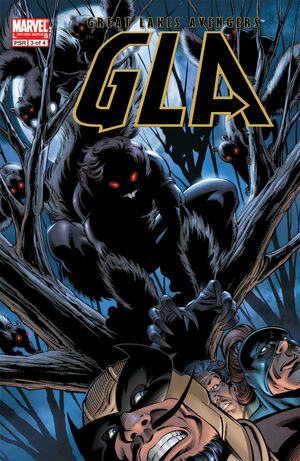 At the end of everything Big Bertha reflects on her time as a GLA member and how she transforms from Big Bertha to a super model (regurgatation). Early on the day of the end of everything Big Bertha watches a tape of Doorman trying to recruit Captain Ultra, the news report mentions that they only successfully recruited Squirrel Girl. When Squirrel Girl and Flatman return home they find Doorman putting up picture of Hawkeye, Grasshopper, Dinah Soar and Mockingbird. Noticing she was getting scared, Flatman moves on with the tour and introduces her to Mister Immortal, currently drunk and impaled on giant scissors. Deathurge appears at the window then travels to see Maelstrom. It is revealed Deathurge was once a minion of Maelstrom and that he is now working for Oblivion. Maelstrom tells him he plans to destroy the universe. Meanwhile Doorman and Squirrel Girl argue over leaving Monkey Joe on guard duty. She claims Monkey Joe once defeated Doctor Doom and they let him guard with Mister I. Bertha reminds herself of the only true superheroic thing the team has ever done and that it is when they stopped a giant snowman robot. Flatman goes investigating the things Batroc's Brigade. Doorman reveals hes been trying to get squirrel girl to quit so shed be safe from the teams misfortune whilst back at the base a mysterious stranger breaks in, snaps Mister Immortals neck and kills Monkey Joe. Big Bertha returns home and finds the corpse and Mister I's neck-broken-body. Back at the end of everything she watches as Flatman falls into the portal.

Retrieved from "https://heykidscomics.fandom.com/wiki/Great_Lakes_Avengers_Vol_1_3?oldid=1613283"
Community content is available under CC-BY-SA unless otherwise noted.