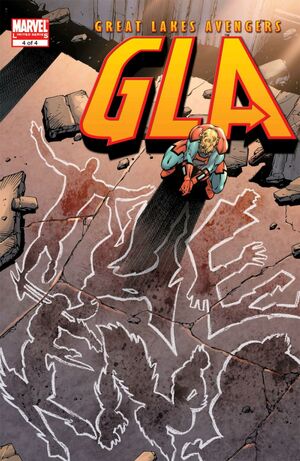 Imagine it, Craig. As the last star burns itself out, you alone will hold vigil over this existence. And you ALONE will learn the GRAND SECRET that will reveal itself -- at the end of all things.

Appearing in "Countdown to a Miscount"Edit

Synopsis for "Countdown to a Miscount"Edit

When Flatman, Doorman and Squirrel Girl return home to headquarters they find Big Bertha sitting on what appears to be Dr. Doom in leather armour. Upon closer inspection they realize that it is actually former member Leather Boy. Leather Boy attacked the headquarters and killed Mister Immortal and Monkey Joe because he was so angry that the G.L.A. would rather recruit someone like Squirrel Girl then offer him membership again on the team.

When Deathurge comes to collect the spirit of Monkey Joe in the form of a squirrel, Mister Immortal captures him. Deathurge then tells Mr. I of his true destiny, to outlive everyone else in the universe and learn the secret of everything. But he also tells Immortal that Maelstrom is trying to take his destiny away by destroying the entire universe now. The G.L.A. then race to the scene where they are met by Batroc's Brigade. Maelstrom succeeds in turning on his doomsday machine and setting up a force field of deadly energy in order to keep the heroes out. Doorman, however, sacrifices himself by using his power to help Mister Immortal get through the force field. Once dead, Doorman meets up with the other dead members of the G.L.A., including Mockingbird. Oblivion tells Doorman that he will restore him to life if he will be his new servant now that Deathurge has gone missing, an offer which Doorman readily accepts.

Back in Wisconsin, Mister Immortal tricks Maelstrom into commiting suicide, giving him the chance to shut down the doomsday device. As the members begin to mourn the loss of their teammate, Doorman reappears and claims the soul of Maelstrom for Oblivion. Once the members return to headquarters they receive a cease and desist notice from the Avengers warning of an impending lawsuit if the team did not change its name. The members all realize that they are mutants (all the non-mutant members being dead) so they decide to name themselves the Great Lakes X-Men instead.

Retrieved from "https://heykidscomics.fandom.com/wiki/Great_Lakes_Avengers_Vol_1_4?oldid=1613284"
Community content is available under CC-BY-SA unless otherwise noted.