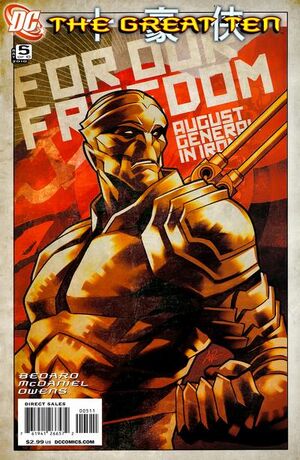 With the truth behind the return of the Old Gods of China finally revealed, the team looks toward its leader – August General in Iron – to take control. But where do the General's loyalties lie? Will he lead with his mind and satisfy mainland China – or will he follow his heart and side with Ghost Fox Killer and the rest of the team? Be here to find out!

Retrieved from "https://heykidscomics.fandom.com/wiki/Great_Ten_Vol_1_5?oldid=1433381"
Community content is available under CC-BY-SA unless otherwise noted.