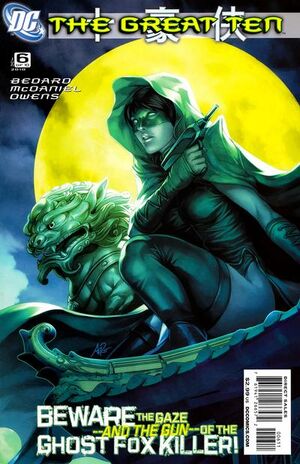 I don't expect to live through this, but then I've been on borrowed time since the night she recruited me. And if I manage to get that parting kiss from her, it will all have been worth it.

With the truth behind the return of the Old Gods of China finally revealed, the team looks toward its leader – August General in Iron – to take control. But where do the General's loyalties lie? Will he lead with his mind and satisfy mainland China – or will he follow his heart and side with Ghost Fox Killer and the rest of the team? Be here to find out!

Retrieved from "https://heykidscomics.fandom.com/wiki/Great_Ten_Vol_1_6?oldid=1433382"
Community content is available under CC-BY-SA unless otherwise noted.