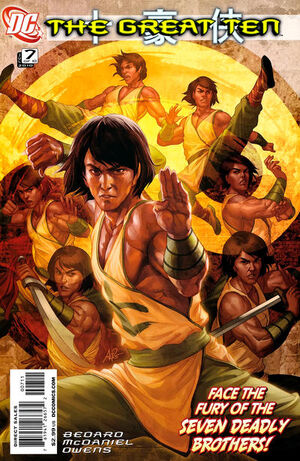 Everyone's Kung fu fighting as we shine the spotlight on the Seven Deadly Brothers – one martial artist who can split into seven different people, each of whom is a master of an ancient martial arts technique. But how will one martial artist – or seven – fare against an alien god and horde of Chinese mobsters?

Retrieved from "https://heykidscomics.fandom.com/wiki/Great_Ten_Vol_1_7?oldid=1433383"
Community content is available under CC-BY-SA unless otherwise noted.