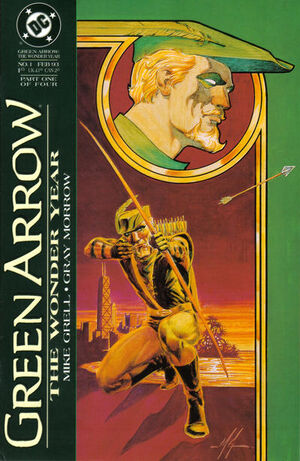 Believe me, after you've lived on a diet of lizards and bugs for awhile, it kind of gives you a different outlook on life. It's a little hard to get excited over more money.

While enjoying a party on a yacht, Oliver Queen meets one of his idols, Howard Hill, who gives him some advice on improving his archery. Oliver is drunk, though, and as he vomits over the side of the boat he falls into the water, and is carried away by the waves.
After returning from Starfish Island, Oliver has a hard time getting back into running Queen Industries. Having spent a lot of time hunting his own food and eating lizards, Oliver has somewhat lost his appreciation for the value of money and high society. His butler Wilson warns that there are many members of the board at Queen Industries who would be happy to see Oliver lose control of his company.
Oliver is invited to a fundraiser for Congressman James Reynolds' campaign. While he has somewhat lost his taste for politics, he admits that he does admire Reynolds, and decides to go. That night, he attends the fundraiser, but is bored to the point that he has strong recollections about his struggle to survive on Starfish Island, and how he only managed to escape by catching some burnouts growing marijuana there.
While getting some air on the balcony, Oliver notices a sniper climbing the fire-escape across the street. He decides to put on the Robin Hood costume he failed to return to the store and stop the shooter with his arrows. As he draws back his arrow, the police mistake his intentions and try to apprehend him. Fortunately, he manages to throw off the shooter's aim and the bullet misses Reynolds by inches.
Afterwards, both Reynolds and his girlfriend Kelli Harris are very appreciative, despite Oliver's vocal dislike of being called "Green Arrow" by them. Reynolds' mood is so changed by the event that he announces plans to run for the presidency. Later, however, Kelli is on the phone with the shooter, apparently having hired him. As she hangs up, Oliver appears in costume on her balcony. At first she is startled, but then he calls her by the name Brianna, she calls him by his real name, and they share an embrace.

Retrieved from "https://heykidscomics.fandom.com/wiki/Green_Arrow:_The_Wonder_Year_Vol_1_1?oldid=1428584"
Community content is available under CC-BY-SA unless otherwise noted.