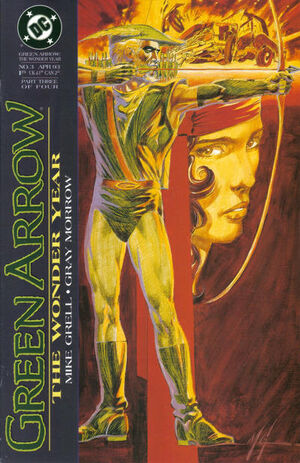 The name-- it's stupid! Why would anyone want to be named "Green Arrow"?

After discovering that his secretary has returned the Robin Hood costume that he was using to be Green Arrow to the costume shop he was renting it from, Oliver Queen calls up the shop and begs to have it back. Unfortunately, his celebrity as Green Arrow has led to all of their Robin Hood costumes being rented out. However, Oliver offers a significant sum of money, and the entire shop's staff is set to work at creating a new costume just for him.
Meanwhile, Congressman Jim Reynolds has doubts about his ability to deliver the kind of hope and excitement that the public expects from him now that he has survived an apparent assassination attempt and announced his candidacy for president. His girlfriend Kelli Harris (whose real name is Brianna Stone) offers some reassurance, but his doubts are still strong.
Oliver picks up the new costume, complaining once again that the name "Green Arrow" is stupid. He then sets to work on rigging his arrows for action. He receives a call from Brianna demanding to know what he will do with the knowledge that she arranged for Reynolds' rise to stardom by staging the assassination attempt. Oliver admits that he hasn't decided yet.
Later that night, Brianna and Reynolds are out meeting the press, and he asks her to pick him up some chap-stick. But as the congressman's limo's odometer reaches 10 miles (having been reset by an unknown individual), it explodes, killing all its inhabitants.
Afterwards, Brianna goes missing. It is assumed by the remaining staff that she should take Reynolds' place in order to salvage the campaign. Meanwhile, in the cover of night, Brianna sneaks into Stone Construction, retrieving some high powered weapons and a fake passport. However, she is interrupted by Green Arrow, who has predicted that her alternate identity as Kelli Harris is to die.
Oliver states that by underhandedly bringing Reynolds to superstardom, she killed him as surely as if she had planted the car bomb herself. She reminds, however, that she was meant to be in the car as well. He responds that this is the only reason he hasn't turned her in already. He recalls that in Brianna's past as a revolutionary, she had organized the detonation of a car bomb on her university campus which killed a janitor, suggesting that Reynolds wouldn't be her first brush with murder. He hammers in the idea that violence doesn't bring about change, and can cause more hurt than anything else.
Oliver presses Brianna for the identity of the sniper she used, and she reveals that it was their acquaintance Delbert Zoukas. Before he can get much more info from her, Oliver realizes that there's someone outside. He notices that the intruder is armed with a law rocket, and it becomes a race to see whether he can loose an arrow faster than the rocket can reach them.

Retrieved from "https://heykidscomics.fandom.com/wiki/Green_Arrow:_The_Wonder_Year_Vol_1_3?oldid=1428586"
Community content is available under CC-BY-SA unless otherwise noted.