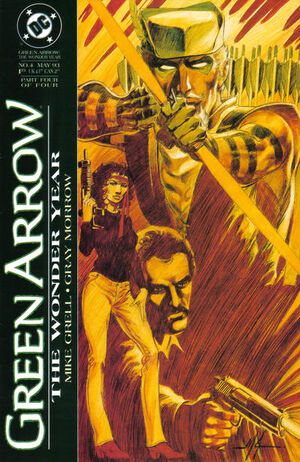 Maybe you were right. Maybe one person can make a difference... even a person in a funny costume.

Green Arrow looses his golf-ball arrow at the oncoming Law rocket, detonating it before it can hit the room that he and Brianna Stone are in. The building is full of artillery, and they are forced to find an escape before a box of grenades ignites. Finding no alternative, they leap down an elevator shaft just in time to escape the explosion.
Still, once they make it outside, they are placed under heavy fire. Brianna covers Oliver as he runs out, but when both Brianna and their attacker are out of bullets, he hesitates when it comes to loosing an arrow and killing. The shooter escapes, and Brianna demands to know why Oliver wouldn't kill. He responds that he is not a killer, but Brianna suggests that so long as he keeps using arrows, one day, he will have to use them to kill.
They return to Oliver's apartment, where he gathers together a bundle of special arrows (sad that he lost his favourite one to the rocket). Together, they drive to a cabin on a lake, to hide. Brianna calls her conspirator Delbert Zoukas to warn him that somebody is after them both, possibly because of their involvement in the lab bombing in school. Afterwards, Oliver makes one more phone call, and while they wait, they make love.
Later, the cabin is surrounded by armed operatives. Oliver, dressed as Green Arrow, comes across one, and knocks him out with a trick arrow. He incapacitates two more with an arrow that releases gas, and ultimately, he and Brianna take out every one of them. Unfortunately, Oliver discovers that the operatives are with the FBI.
Del Zoukas appears, revealing his connections with the bureau, and the fact that he had been undercover within Brianna's revolutionary organization since its inception. Oliver explains what he had already deduced: that the FBI provided training to Brianna's group in order to give them enough rope to hang themselves with. So, they doctored the bomb used in the lab explosion so that it would be more powerful, hoping that the damage would bring the public to condemn the group for protesting the Vietnam War. Unfortunately, the blast killed a janitor.
Delbert had tried to make up for the mistake by helping Brianna get back into society, but her plan to make Congressman Jim Reynolds president would have brought her under enough scrutiny to give away her identity and her connection to the FBI. So, Zoukas had tried to have her killed, using Reynolds' assassination as a cover. Now, Delbert has rigged the cabin with the same explosives used on Reynolds' limo, which would pin both it and Reynolds' death on Brianna, using the fact that she was next in line for presidential candidacy as a motive.
At that moment, Oliver reveals that the entire exchange was being recorded and broadcast live by the media. Delbert realizes that his life and career are going to be destroyed by the release, and attempts to shoot himself, but Oliver knocks the gun from his hand with an arrow, forcing him to answer for his crimes.
Oliver gives Brianna the chance to decide her own fate, but reminds her that the whole situation started with her bad reckless choices. However, he suggests that this could be her chance to deliver her message to the public, finally. Instead, she returns to the cabin with nothing to say. A police officer mentions a detonator to Oliver, and he realizes too late what Brianna intends. She detonates the explosives that Zoukas laid, and dies in the blast.

Retrieved from "https://heykidscomics.fandom.com/wiki/Green_Arrow:_The_Wonder_Year_Vol_1_4?oldid=1428587"
Community content is available under CC-BY-SA unless otherwise noted.