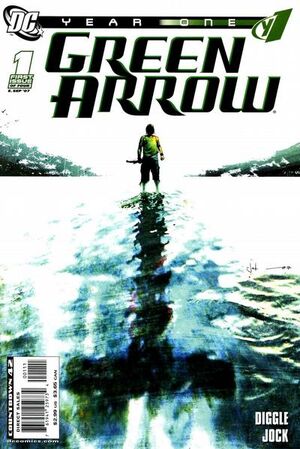 All right, so maybe I don't know much about being a hero like Mister Robin Hood here -- but I am heroically drunk!

Oliver Queen and his partner Hackett go mountain climbing across a frozen tundra. Hackett saves Ollie from nearly falling into a ravine, and criticizes him for his recklessness.

Three days later, the two return to Star City where they appear at a charity auction fundraiser for the Star City Drug and Rehabilitation Center. Ollie is inebriated and makes a spectacle of himself – particularly when he makes an outrageous bid for the prop bow used by archer Howard Hill in the film The Adventures of Robin Hood. Ollie takes the stage after the auction, and embarrasses himself by throwing up into a wastepaper basket.

The two leave, and Ollie is mortified over his behavior. He tells Hackett that he wishes to go with him on a business trip involving some of Queen's Industries offshore accounts. Hackett tries to talk him out of it, but Ollie insists on coming along. He cannot bear to be in the public spotlight after the fundraiser fiasco.

On the luxury ship The Pacific Queen, Ollie learns that Hackett has been embezzling money on behalf of a criminal named China White. He didn't want Ollie involved, but knew that his presence on the journey threatened to expose China White's operations. Hackett holds Queen at gunpoint, but Ollie knocks him down with a punch to the jaw. Hackett responds with a head-butt and Ollie collapses onto the deck. China White telephones Hackett and orders him to shoot Queen. Hackett doesn’t want to murder Ollie in cold blood, so he dumps him overboard.

Retrieved from "https://heykidscomics.fandom.com/wiki/Green_Arrow:_Year_One_Vol_1_1?oldid=1428588"
Community content is available under CC-BY-SA unless otherwise noted.