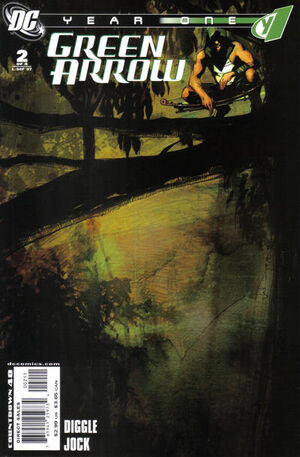 The water is still hot. Oily. Tinged with rust and mud and things I don't even want to imagine. It's the best drink I've ever had.

Ollie washes up on the beach on one of the Fiji Islands. He is alone, tired and hungry. He begins wandering into the nearby jungle as the sun burns down upon him. He comes upon the remains of a camp, along with a water pump and power generator, both of which, turn out to be useless however. Near the camp is a pit that leads down into a dark, dank shaft It is filled with the skeletal remains of human bodies – victims of apparent gunshot wounds.

Going back topside, Ollie finds a leaf-spring suspension blade and fashions it into a makeshift bow. He uses rusty nails, bamboo shoots and broken bottles to make arrows, and manages to eke out an existence for himself hunting fish, birds and monkeys. He takes a piece of sail canvas and uses it as a poncho to protect himself from the sun.

Several nights pass, and Ollie hears the sound of an airplane from off in the distance. He runs out from the camp and fires a signal flare arrow (made from burning rubber) in the plane’s direction. As the plane angles itself in Ollie's direction, a gunman leans out the hatch and begins spraying machine gun fire at him.

Retrieved from "https://heykidscomics.fandom.com/wiki/Green_Arrow:_Year_One_Vol_1_2?oldid=1428589"
Community content is available under CC-BY-SA unless otherwise noted.