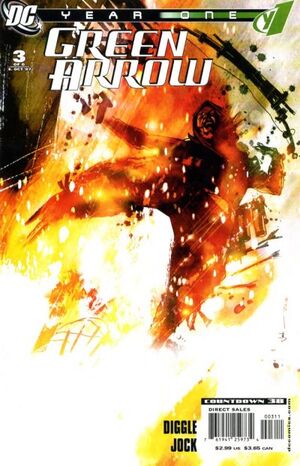 Bloody Hell, Ollie... been getting in touch with your... masculine side, have you...? And to think... for a second there... I was actually pleased to see you!

A gunman from the seaplane continues to fire at Oliver, but Ollie manages to respond with two well-placed arrows. The pilot loses control and the plane crashes into the side of a mountain. Ollie scales the side of the mountain to inspect the wreckage and manages to acquire a pair of boots in the process.

Wandering around the volcanic base of the mountain, Ollie finds tilled fields of poppy seed. He also meets a pregnant woman who tells him that China White uses slave labor to cultivate the poppies for heroin. China White and Hackett arrive at the sight of the downed plane, and Ollie hides in the brush. China orders Hackett to find out who is responsible for the plane crash. She also has him finish off the surviving crewmen.

As night falls, Oliver encounters Hackett in the jungle. Hackett opens fire on him with his machine gun, but Ollie pins him to a tree with an arrow. Hackett draws a handgun and tags Ollie in the shoulder. He then frees himself from the arrow and produces a grenade launcher, which he fires in Ollie’s direction. The attack fails to produce the desired results however, and the tree falls down on top of Hackett. Ollie is bleeding profusely and collapses to the ground. Everything goes white.

Retrieved from "https://heykidscomics.fandom.com/wiki/Green_Arrow:_Year_One_Vol_1_3?oldid=1428590"
Community content is available under CC-BY-SA unless otherwise noted.