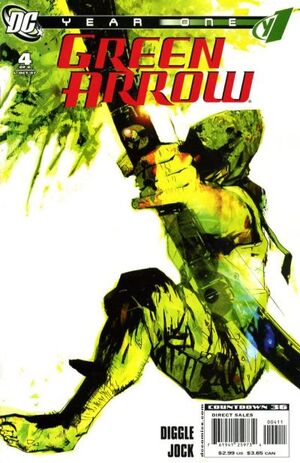 Bring me the head of Oliver Queen... or end your days in the rat cage.

When Oliver Queen awakens, he finds the pregnant slave woman kneeling over him. He learns that her name is Taiana and she resets his broken arm. To deaden the pain, she begins feeding him opium. Over the course of several days, Ollie slowly grows dependent on the opium while he heals from his injuries. He recognizes the hunger of addiction and swears to wean himself off the drug.

Meanwhile, Hackett reports back to China White. China is furious that Hackett didn't shoot Ollie aboard the Pacific Queen as she instructed him to. She tells him to find Queen and finish him off or else she will throw him away in a dungeon to be eaten by rats.

A short time later, two of China's gunmen find the meager camp that Taiana and Ollie have been resting in. They open fire on him, but Queen drives them off with several well-placed shots from his custom-made bow. Taiana and he run off in separate directions and Ollie eventually reaches the shoreline. He is shocked to find that his yacht, the Pacific Queen has beached itself on the shore. He goes inside to clean himself up and gather supplies. He finds the Howard Hill bow that he purchased at the auction, then sets fire to the ship. He hopes that the flames will alert China White's mercenaries and that they will come looking for him. This time however, Oliver Queen is ready to fight back.

Retrieved from "https://heykidscomics.fandom.com/wiki/Green_Arrow:_Year_One_Vol_1_4?oldid=1428591"
Community content is available under CC-BY-SA unless otherwise noted.