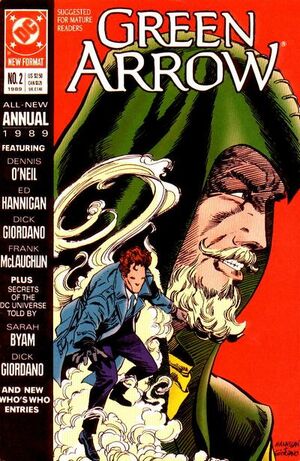 I'm a fair man. So I'm going to let you start running. When you're a dozen yards away, I'll try to bring you down. You could get lucky. I might miss.

Below, The Question tries to remove his mask, but finds he is unable to do so. He encounters the former criminal kingpin of the island, the same man whose criminal empire The Question destroyed the last time he was on the island.

Green Arrow arrives in Hub City and learns the gas is to be released the following day at noon. He goes to mayor Myra Connelly with the news. After a rap session with Aristotle Rodor, Green Arrow stops the terrorists.

Appearing in "Do Black Canaries Sing?"Edit

Synopsis for "Do Black Canaries Sing?"Edit

A kid steals Dinah Drake Lance's purse and she and her daughter go after the young thief.

Retrieved from "https://heykidscomics.fandom.com/wiki/Green_Arrow_Annual_Vol_2_2?oldid=1428186"
Community content is available under CC-BY-SA unless otherwise noted.