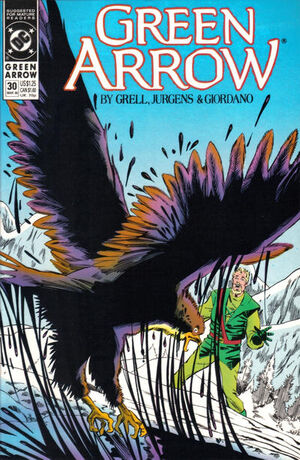 You don't hear it, do you? I didn't either... not at first. But then it started. First it was small... so small you'd never notice. And then it got bigger. The screams, the cries, and now this... this... moaning. Do you know what it is? I do. It's dying.

After a tanker owned by the Argon oil company crashes on the Alaska coast, the company's Paul Chandler claims to have no knowledge of the whereabouts of Captain Lou Springsteen, the man who crashed the tanker. Of course, Mr. Chandler knows exactly where Springsteen is, having placed him in a lodge owned by the company days before, for his own protection. Chandler plans to lay blame on Springsteen, but a storm prevents him from retrieving his scapegoat for a few days.
Meanwhile, Green Arrow arrives at the lodge where Springsteen is hidden away. The man has obviously become somewhat disturbed by his isolation, claiming that he hears the cries of nature, and the constant howling of a coyote. Oliver plans to take Springsteen in to the authorities once the storm clears.
Chandler and his cohorts devise a plan in which they give up their pipeline to the Native Americans whose land it is on, thereby transferring the responsibility to them, and eventually forcing them to return to Argon for help running it. The result is a PR success.
Springsteen explains to Oliver that he knows that he will be taking the fall, and that the oil company is practically untouchable because of their affluence and power. Chandler decides it's time to go get Springsteen, and they load into a Cessna plane. However, an eagle poisoned by the oil spill falls from the sky through the plane's windshield, and it crashes into a mountainside, killing all inside.
As Springteen awaits a punishment that will never come, Oliver leaves. The Argon company has rebranded itself as Argos, and the whole event is whitewashed from history.

Retrieved from "https://heykidscomics.fandom.com/wiki/Green_Arrow_Vol_2_30?oldid=1428214"
Community content is available under CC-BY-SA unless otherwise noted.