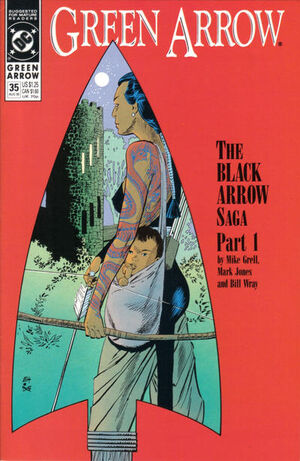 I never should have trusted Fyers. I let my own need for revenge get the better of my judgment. He played me for a chump and left a trail that led straight to my doorstep.

Oliver Queen is arrested for terrorism and sabotage by the FBI. Later, CIA, DEA and FBI question him about his recent mission in Panama under Eddie Fyers. Oliver refuses to answer questions until they explain the charges. Mr. Jones of the DEA reveals that the tanker on which Oliver had planted a tracker had exploded, and that it was a US vessel on an anti-drug interdiction force in the area.
Oliver realizes that the tracker he placed was actually an explosive device, and that Fyers has betrayed him once again. He informs the agents that Fyers claimed to have been working for the DEA. The agents state that Fyers is actually working for a Panamanian drug lord, and reveal that they have evidence that Oliver met with Fyers, and that they also know about the $300,000 he stole from the CIA years ago.
Dinah Lance visits Oliver in jail with a court-appointed lawyer. The lawyer suggests that Oliver plea-bargain, but the prospect enrages him, because he is innocent. He fires the attorney, and explains to Dinah how he was set up by Fyers. Dinah promises to try to clear his name while he's stuck in jail. As Oliver is being transported to Fort Lewis, Eddie Fyers shoots out the tires of the vehicle, allowing Oliver to escape. Meanwhile, Dinah makes a call to Shado, asking for help.

Retrieved from "https://heykidscomics.fandom.com/wiki/Green_Arrow_Vol_2_35?oldid=1428219"
Community content is available under CC-BY-SA unless otherwise noted.