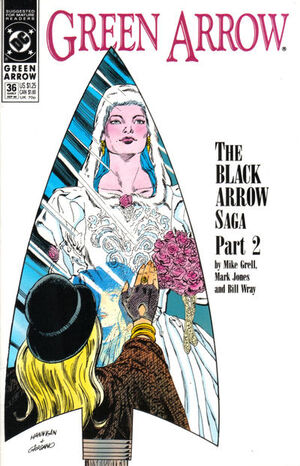 There's about $20,000 there... enough for a start. An apartment, tuition and books.
You'll have to work for the rest if you want it bad enough.
If you need a job, check with Sherwood Florist.

A street kid named Marianne lives a decent life in Seattle, occasionally picking pockets and doing small robberies in order to keep herself alive. She has a crush on boy named Tommy, and she is harassed frequently by a thug named Manzetti. She dreams of being a princess, and owning a lovely white dress she's seen in a shop window.
One night, she returns home to an abandoned, burned-out warehouse. She is surprised to find Oliver Queen hiding inside. She distrusts him at first, but when he protects her from an attack by Manzetti and his friends, she grows to trust him. After the thugs run off, she tends to Oliver's wounds, and offers him some food and rest. That night, she is awakened by the sound of Oliver crying in his sleep, having nightmares.
In the morning, Marianne is angered to find Oliver awake and reading the private journals she's been keeping, which tell the story of a street kid from her own point of view. Having read her story, he asks her how good a burglar she is, and satisfied with her answer, asks her to do him a favour.
Marianne sneaks into the Sherwood Florist without alerting Dinah Lance, and steals Oliver's bow and arrows. When she returns to the warehouse, she finds that Oliver has shaved his head and facial hair, so as to be unrecognizable. She reveals that she knows he's accused of terrorism, and he professes innocence, and a need to clear his name.
Before he leaves, he gives Marianne $20,000 and suggests she get a job at the Sherwood Florist. She uses some of the money to buy the dress she's been dreaming of, and apparently lives happily ever after. Elsewhere, Eddie Fyers is surprised when he is narrowly missed by one of Oliver's arrows.