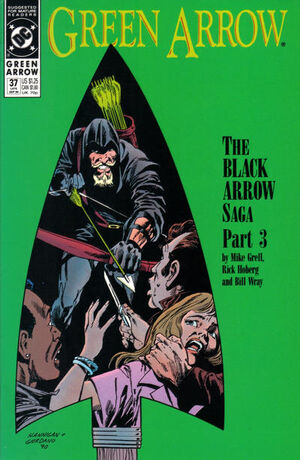 He spoke of you often, always with great love. He has one dream of joy and that is to live and grow old with you. His only sorry was that you did not want to have children.

Dinah Lance meets with Shado, realizing that the child she has brought with her is the son of Oliver Queen. Dinah is upset, knowing that Shado has given him what she could not give him, which only serves to compound her preexisting jealousy of the lady archer.
Shado attempts to reassure Dinah, revealing that Oliver doesn't know the child is his, and that it was conceived when she had raped him during a fever dream. She states that she had known from the beginning that Dinah is the only woman that Oliver could love, and so had taken a part of him for herself. Dinah is skeptical, but accepting.
Dinah explains how Oliver was framed by Eddie Fyers, and that Shado will have to find and stop Oliver before he kills Fyers, otherwise he will have no way to clear his name. Meanwhile, Dinah is being watched by the FBI, and can't search for Oliver herself. Shado agrees to help, if Dinah watches over her son.
Elsewhere, Oliver has tracked Fyers down, and fires an hour at him. Fyers fires his gun back, swearing that Oliver is a dead man. He calls his employers, stating that regardless of their wishes, he isn't going to hold back next time Oliver comes for him. Later, Oliver is forced to pass buy a mugging in order to keep from identifying himself, however, he returns once the muggers are out of sight and beats them all up, reinforcing the fact that Seattle is still his turf.
Meanwhile, Dinah goes out in her Black Canary outfit, and is tailed by an FBI car. Fortunately, Dinah is acting as a red-herring, and she has created an opportunity for Shado to leave the Sherwood Florist unseen.
When Oliver returns to his hideout, he finds Eddie Fyers there, waiting for him already.

Retrieved from "https://heykidscomics.fandom.com/wiki/Green_Arrow_Vol_2_37?oldid=1428221"
Community content is available under CC-BY-SA unless otherwise noted.