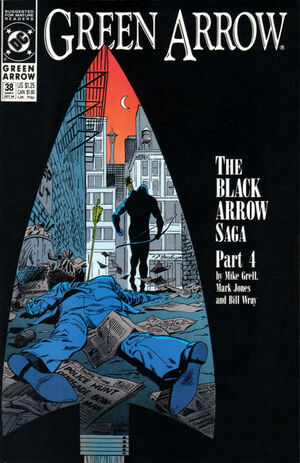 It's already too late! The took away everything! Everything! What the hell happened? I was... happy!

Appearing in "The Black Arrow Saga Part 4: Hunters and Killers"Edit

Synopsis for "The Black Arrow Saga Part 4: Hunters and Killers"Edit

Drug lord Reggie Mandell gets a call from an informant claiming to know where Oliver Queen is hiding.
In his hideout, Oliver is confronted by Eddie Fyers, who claims that while he set Oliver up, he was also set up. They realize that the arrow that was shot at Fyers wasn't shot by Oliver, and was a plant meant to either cause Fyers to kill him if it missed or to incriminate Oliver as a murderer if it hit.
Despite these revelations, they aim their weapons at each other. Shado appears, hoping to stop Oliver from killing Fyers, but Oliver lets the arrow loose into his chest anyway. Apparently, Oliver suspected that Fyers would be equipped with body armour, and was proved right. They resolve to believe each others' stories and go to see Fyers' real employers: the CIA.
As they leave, they are attacked by gunmen, and both Oliver and Fyers are hit with non-fatal wounds. Shado discovers that Fyers had a tracker on him. They form a plan to deal with the conspirators.
Three CIA agents meet and Oliver bursts in through the window. He forces them to sit and listen while he outlines their plot to have him take the fall for their own dubious plan to regain control of the Panama Canal. Oliver explains how they had ruined his life, and how pointless any attempt they may have made to clear his name might be. He claims that he would be killed before he was ever put to trial for the crime of which he was framed.
As if to illustrate his point, a sniper fires a round into Oliver's back through the broken window. Moment later, Shado fires an arrow into the shooter's heart. Two of CIA agents are shaken, and come around to Oliver's point of view, but the third hopes to make do. When Oliver recovers (having been saved by Fyers' body armour), the villain is exposed.
Afterwards, Fyers presents Ollie with a gift: Mandell. Oliver aims an arrow at his enemy, claiming that he will kill him in the name of the lives destroyed by Drugs. Mandell knows better, shouting that it's all for revenge. Oliver, knowing that Mandell is right, fires his arrow off into the sea in frustration. As he leaves, Fyers shoots Mandell through the head in cold blood.
Later, Oliver is reunited with Dinah Lance, but she is obviously still upset about the fact that Shado used him to conceive a child. Elsewhere, a news outlet receives a tape from Oliver, and decides to see what he has to say.

Retrieved from "https://heykidscomics.fandom.com/wiki/Green_Arrow_Vol_2_38?oldid=1428222"
Community content is available under CC-BY-SA unless otherwise noted.