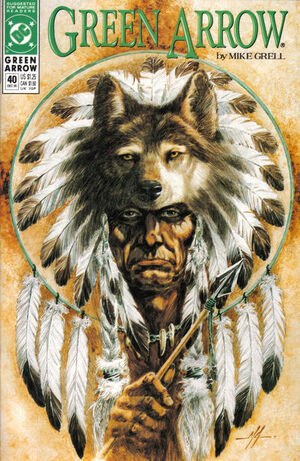 We made bargains, and any bargain is only as good as a man is honest. We should have known that but we were men and we weren't honest with ourselves.

Oliver Queen walks through wilderness and meets a Native American near an old truck with engine trouble. The native tells Oliver he has been waiting for him, using his knowledge of the land to deduce what kind of man Oliver is. He asks Oliver if he can fix the engine, and Oliver gives it a shot.
Oliver gets the truck started and the Indian gives him a ride to the mountain, but once near the mountain, the Indian stops the truck and they begin to walk up the unbeaten path. After a tiring walk, they make camp, and the native introduces himself as Stalking Wolf. The two men speak of nature, people and ecology.
That night, Oliver dreams that he must climb to the top of the mountain to be given his true name. When he awakens, Stalking Wolf is gone and Oliver makes his way up the mountain. At the end of the trail, Oliver finds Stalking Wolf's handmade necklace and talisman, which he puts around his neck before starting back down the mountain.

Retrieved from "https://heykidscomics.fandom.com/wiki/Green_Arrow_Vol_2_40?oldid=1428224"
Community content is available under CC-BY-SA unless otherwise noted.