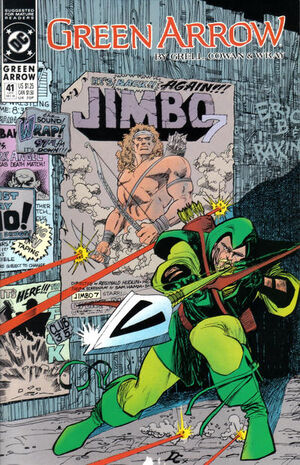 I've been wandering around for a while, and they don't exactly have the border clearly marked in these mountains.

Appearing in "Hooray for Ollie-Wood"Edit

Synopsis for "Hooray for Ollie-Wood"Edit

As Oliver Queen wanders the forest, he comes across a waterfall, and sees a woman dangling precariously from a tree branch over the falls. When the woman drops into the water, Oliver jumps in without a thought, and saves her life.
Unfortunately, the woman he's saved is actually a stuntman for a film shoot that he has disrupted. Despite the disruption, Oliver befriends the stunt coordinator, Terry Marsh. Terry reveals that Oliver has wandered into Canada by accident. They bond over a mutual admiration for Oliver's idol Howard Hill, stunt archer for the Robin Hood film serials. When Oliver demonstrates his archery skills, Terry offers him a job on the set for a particularly dangerous shot.
That night, Terry and Ollie head into town and use Oliver's archery skills as a means to win bets at a bar. Later, Terry gets into an argument with a supporter of the IRA, which explodes into a full-on bar-brawl. Afterwards, Oliver and Terry walk home in a drunken stupor.
The next morning, Terry shows Oliver some of the ropes of stunt acting. He intends to show Oliver the cache of weapons that they use for their filming, but when he opens the storage truck, it is empty. RCMP investigators suggest that the weapons were stolen by IRA supporters, and will soon be sent to Ireland. Terry and Oliver are questioned, and it seems that whoever stole the weapons took the key to the truck and managed to return it all while Terry slept.
Oliver is nearly recognized by an RCMP officer, but the issue doesn't go further than that.

Retrieved from "https://heykidscomics.fandom.com/wiki/Green_Arrow_Vol_2_41?oldid=1428225"
Community content is available under CC-BY-SA unless otherwise noted.