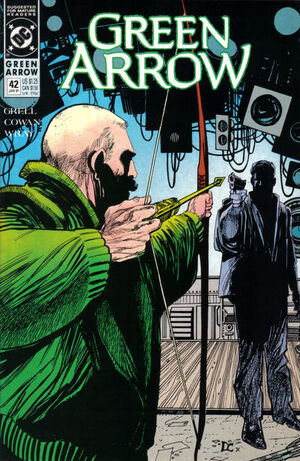 You know, one thing that didn't occur to those bastards is that I was a pain in the ass as an innocent man... I kind of wonder what kind of trouble I could stir up if I really tried!

Oliver Queen and his friend Terry Marsh watch the rough cut of the new "Jimbo" film. The director claims that the film won't be believable if the guns that appear in it aren't real. The detective on the case of the stolen weapons is unmoved, noting that the weapons were probably stolen by the IRA, and as such are likely already out of the country.
The detective suspects Oliver, noting his past, and the accusations that he is a terrorist. Despite the fact that Oliver was cleared of that charge, the detective is suspicious of the fact that he is always surrounded by crime, but never the cause of it. Oliver is annoyed, and storms off.
Outside, Oliver happens to meet the same RCMP officer - the one who had called himself The Horseman - that he had previously in Seattle. He explains that the RCMP has been on the trail of an IRA operative known as Tommy O'Connor. O'Connor has supposedly been active for more than 50 years.
Later, Terry finds Oliver alone in a bar drinking. Oliver notices that Terry's got a limp, but he brushes it off. Terry convinces Oliver to tell him the story of how he had been set up and betrayed by his government, and labelled a terrorist forever, despite his name being cleared. Oliver wonders what kind of trouble he could stir up if he really tried, having been innocent the whole time.
Oliver leaves the bar by himself, and notices some strange footprints. He follows them to a prop crate from the film, and then falls asleep on top of it. Eventually, Terry drives up, assuming that Oliver is drunk. Soon, Oliver reveals that he knows Terry hasn't been drunk, that the fight in the bar the night before was staged, and ultimately that Terry is an IRA member. Terry denies it, but Oliver opens the crate, revealing the stolen guns. Oliver explains that he knew it was Terry, because of his limp creating the unusual footprints.
Terry tells of how he is Tommy O'Connor, having taken the name from his maternal grandfather - thus explaining the 50 year record of crimes. He claims to be a victim of circumstance; that he became what was expected of him. When Terry's men show up, the two men aim their weapons at each other, but ultimately, Oliver lets him go.

Retrieved from "https://heykidscomics.fandom.com/wiki/Green_Arrow_Vol_2_42?oldid=1428226"
Community content is available under CC-BY-SA unless otherwise noted.