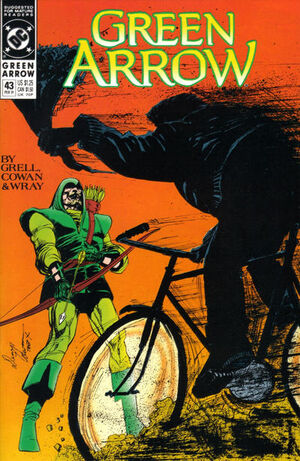 A legend really doesn't have much choice if he's going to stay a legend. The great Tommy O'Connor would pick something really special for his last hurrah. And this is your last, isn't it?

Appearing in "Legends of Stupid Heroes"Edit

Synopsis for "Legends of Stupid Heroes"Edit

Oliver Queen is questioned by the detective who had been working on the case of the stolen guns from the set of the new "Jimbo" movie. He is angry that Ollie allowed Terry Marsh, aka Tommy O'Connor (the head of an IRA faction) to escape. Oliver defends himself by saying that Terry is his friend, and while they have different ideologies, they are alike.
The detective is incredulous, and lists off a number of acts of terrorism that Terry has committed in the name of the IRA. One such act was hiding a bomb inside a child's bicycle, and sending the boy through a British Army checkpoint before setting it off. After hearing all of the crimes his friend committed, Oliver decides to hunt and catch Terry himself.
Oliver heads to Northern Ireland, and heads into an IRA sympathetic bar. He makes a spectacle of himself, calling for a round in the name of Tommy O'Connor. The denizens of the bar are unwelcoming, and he is ejected from the bar. Outside, he is accosted by a group of thugs. Oliver easily trounces them all and tells them to notify Tommy O'Connor of his presence.
Later that night, Oliver sits by the phone with a drink. When it rings, he hears Terry's voice telling him to go home.
The next morning, Terry arrives in his apartment to find Oliver waiting for him there. Oliver aims his bow at Terry, suggesting that he will kill his friend if it means saving the lives of any of the people to be hurt in Tommy O'Connor's "last hurrah." On a table nearby is the device with which Terry intends to detonate a bomb planted in another bicycle, just like he had done before. Terry pulls a knife, and throws it at Oliver before leaping for the device, hoping to beat the arrow.
The bomb fails to go off, and outside, Oliver buys the bike away from the boy atop it. As Oliver walks away with the bike, blood runs down his hand from the knife wound.

Retrieved from "https://heykidscomics.fandom.com/wiki/Green_Arrow_Vol_2_43?oldid=1428227"
Community content is available under CC-BY-SA unless otherwise noted.