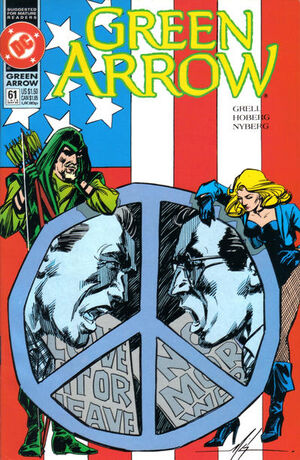 Well, here we are under a sky full of stars... The majesty of the mountains surrounding us. -- And just a few miles away, in a sleepy little town... some lucky guy is eating a pizza and watching Madonna on VH1.

Oliver Queen and Dinah Lance take a trip into the Olympic Mountains for the weekend. Meanwhile, anti-war protests are going on in the streets of Seattle.
When a young protester is shown on the news, Harry Robinson, an editor with a newspaper, realizes that he bears a strong resemblance to a man he knew who protested the Vietnam war. He discovers that the young man is his acquaintance's son, and hopes to use the boy as a stepping-stone to a Pulitzer prize.
Harry Robinson tracks down the boy, named Josh Goldman, who works as a mechanic. He explains that he and the Josh's father, Jimmy Goldman, had protested the Vietnam war together at Berkeley. Robinson mentions that the government is thinking of reinstating the draft. Josh states that he already registered as a conscientious objector.
The next day, Robinson prints an article detailing the relation between Jimmy Goldman and his son and their legacy. Josh is called to speak with high-ranking military officials who are concerned about his new status as a leader for the youth movement. One of the military men reminds him that Jimmy Goldman was a Medal of Honor winner, despite having also been a conscientious objector. Jimmy Goldman was put on the front lines, and was killed, posthumously receiving the award. Josh states that he wants people to think for themselves before leaving.
Oliver and Dinah return to Seattle just in time to see Josh Goldman emerge in front of a crowd of anti-war protesters.

Retrieved from "https://heykidscomics.fandom.com/wiki/Green_Arrow_Vol_2_61?oldid=1428246"
Community content is available under CC-BY-SA unless otherwise noted.