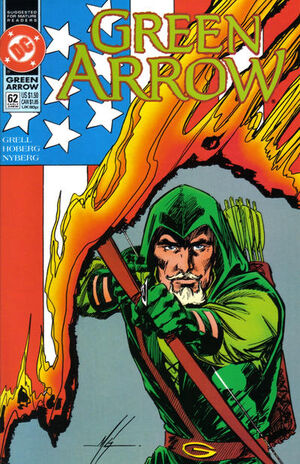 As Josh Goldman meets a crowd of protesters outside a military office, he is asked by the media to make a statement. He refuses to make any statements other than "Go home," and many are disappointed. Harry Robinson, a reporter who knew Josh's father wonders why Josh would waste his opportunity to rouse the rabble.
Nearby, Oliver Queen and Dinah Lance decide not to get involved, and go home.
Josh heads home, but his neighbour Carl stops him in the street, demanding that he tell the rabble to stop protesting war, because the town's economy depends on it. Josh refuses, claiming that both sides are right, but their perspectives on the issue are different. Carl and his friends angrily throw a chair-leg at Josh, knocking him to the ground, and then they beat and kick him. Josh makes no attempt to resist them, until Green Arrow appears.
He and Black Canary fight off Carl and his friends, despite Josh's protests, until suddenly the gas station Josh lives above catches fire. Dinah and Oliver rush in and save Josh's wife and children, but the rivalry between the pro and anti-war protest groups escalates to the point that someone begins burning an American Flag. Josh punches the man and puts out the fire, saying that he can't give either side any answers, and that he won't be their martyr or their symbol. Dejected, everybody goes home, and Oliver expresses his solidarity with Josh's decision.

Retrieved from "https://heykidscomics.fandom.com/wiki/Green_Arrow_Vol_2_62?oldid=1428247"
Community content is available under CC-BY-SA unless otherwise noted.